Jos Buttler and KL Rahul have combined to make 859 runs in 553 balls they have faced so far this season at a strike rate of over 165 and an average of over 70. The Indian Premier League (IPL) 2022 has been a bowler's season so far. The bowlers have dominated the league, especially the pace bowlers with the new ball. The top-order batters haven't been able to make use of the powerplay conditions as much as they could have liked.

However, there are two openers who have scored five centuries between themselves this season - one is Jos Buttler with three tons and the other KL Rahul with two centuries to his name so far.

Buttler and Rahul have combined to make 859 runs in 553 balls they have faced so far this season at a strike rate of over 165 and an average of over 70.

Jos Buttler plays for Rajasthan Royals and KL Rahul for Lucknow Super Giants. These are two openers playing for two different teams with different batting combinations. The way these two have approached their innings is also very different yet the result has been quite similar.

The common thing about the centuries is both Buttler and Rahul have played a minimum of 60 balls during their century knocks. Despite the commonality, the pacing of the five innings and each of their T20 inning, in general, is very different.

Both KL Rahul centuries came against Mumbai Indians and finished at a score of 103. In both innings, Rahul didn't have much support from the other end for the most part of his innings. 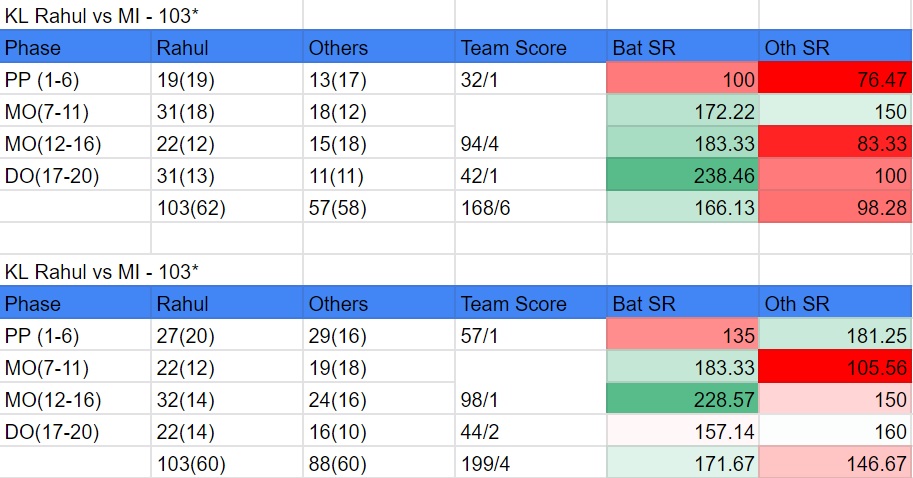 However, what Buttler got from his batting lineup was much better support after the powerplay that gave time to him to settle down and choose his bowlers to hit. The bowlers which he didn't target, the other end took charge of it. Both KL Rahul and Jos Buttler scored five terrific centuries but in the LSG opener's case, he didn't get much support from the other end and had to smartly keep the scoring rate up without not taking much risk. In the case of Buttler, the RR opener got much better support from others.

Two different techniques, different approaches, different team composition but both Rahul and Buttler have shown a masterclass in how to adapt to the situation and get the team to a better position with whatever skills they have. With almost half a season still left, we could see a few more master knocks from these two high-quality openers.