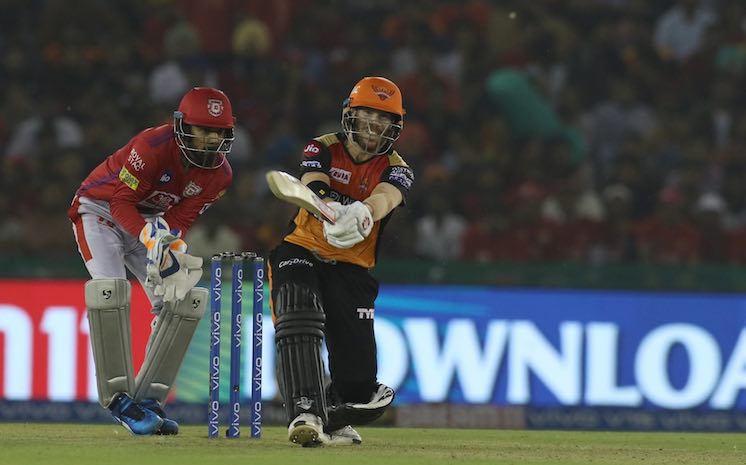 In-form Warner brought up his third IPL fifty of the season as he scored an unbeaten 70 (62 balls, 4x6, 6x1), but it was an uncharacteristic knock where the destructive Australian left-hander struggled with timing as he carried his bat through the innings.

In the last two overs, Sunrisers managed 26 runs to up the ante with Deepak Hooda (14*) hitting Mohammed Shami (1/30) for 15 runs in the final over, including two fours and a six.

Warner joined hands with Manish Pandey (19) for a 55-run fourth wicket partnership but it never really took off.

Asked to bat first, the visitors lost Jonny Bairstow (1) early, as the England stumper-batsman flicked Mujeeb Ur Rahman (1/34) to Ravichandran Ashwin at short midwicket who took a smart catch. It took Warner 15 balls to hit his first boundary in the fifth over when the southpaw punched an overpitched Ankit Rajpoot delivery past the diving mid-on fielder.

Warner and Vijay Shankar (26) laboured to a 49-run stand for the second wicket as Sunrisers trudged to 50/1 at the halfway stage. Shankar lost his wicket just after that, trying to guide a Ashwin (1/30) carrom ball towards third man and feathering it to wicketkeeper K.L. Rahul in the process.

Mohammad Nabi (12) was run out by Ashwin off his own bowling as Sunrisers could only get to 92/3 after 15 overs. Pandey and Warner then tried their best to get some runs but it was only after the latter got out that Hyderabad accelerated to get to 150-run mark.