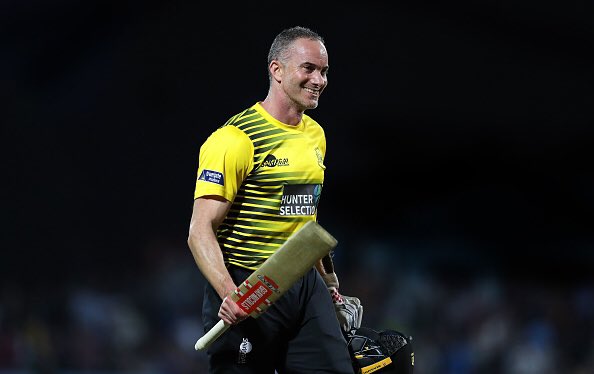 London, Aug 30: Australia's Michael Klinger has moved to the second spot in the list of most centuries scored in T20 cricket by a batsman after he scored his eighth ton in the ongoing T20 Blast competition.

Klinger, 39, smashed 102* off 65 balls to guide Gloucestershire to a T20 Blast quarter-final berth with a five-run win over Kent on Thursday.

The opener is set to call time on his 21-year career at the end of England's T20 tournament.

This was his eighth T20 century and he is only behind swashbuckling West Indies opener Chris Gayle who has 21 tons against his name. Aaron Finch, David Warner, Luke Wright and Brendon McCullum have seven, followed by Rohit Sharma who has six.

"I didn't even know I got 100 because the main scoreboard had 91," Klinger was quoted as saying by ICC. "It probably took a bit of pressure off not even knowing I was close, to be honest."