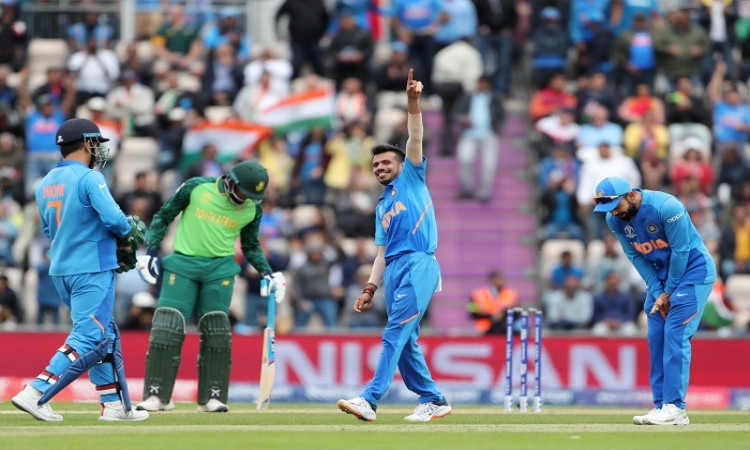 Southampton, June 5 (CRICKETNMORE):  India restricted South Africa to 227/9 in their opening match of the 2019 World Cup. Yuzvendra Chahal was the chief tormentor for the tottering Proteas batting line-up, picking four wickets while Jasprit Bumrah accounted for the wickets of openers Hashim Amla and Quinton de Kock.

South Africa, who are playing their third game of the tournament, won the toss and chose to bat first. They lost their openers to Bumrah in the first six overs before Rassie van der Dussen and captain Faf du Plessis took them past the 50-run mark.

Chahal then took over from Jasprit Bumrah, breaking the third-wicket partnership by spinning the ball around Van der Dussen and hitting the stumps even as the batsman looked to play the reverse sweep. Chahal followed this up with the wicket of Du Plessis. J.P. Duminy was then caught plumb in front by Kuldeep Yadav after which David Miller and Andile Phehlukwayo looked to consolidate the innings with a rather pragmatic 46-run stand for the sixth wicket that came off 75 balls.

It was Chahal who provided the breakthrough again by dismissing Miller. Phehlukwayo became Chahal's fourth wicket in the 40th over. Chris Morris and Kagiso Rabada then countered with a 66-run stand off 59 balls for the eighth wicket that took South Africa past the 200-run mark. Bhuvneshwar Kumar then took the wickets of Morris and Imran Tahir to restrict South Africa to 227.