Your fighting spirit is very inspiring: Afridi to Yuvraj 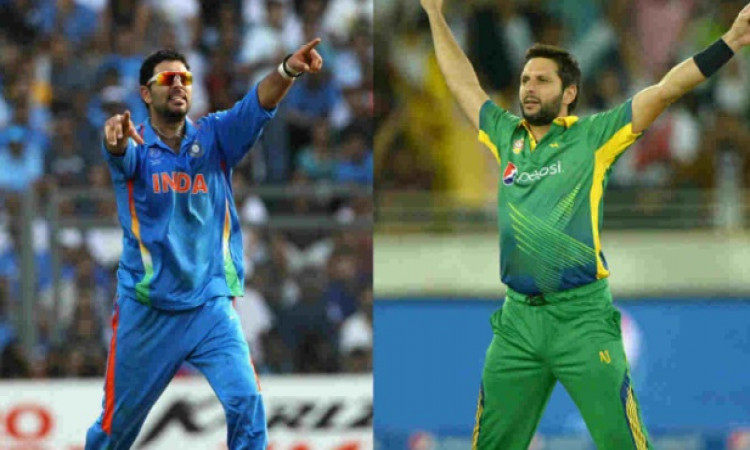 "Congratulations on a fantastic career Yuvraj Singh. You were an amazing batsman and a brilliant fielder with big match temperament. Your fighting ability is very inspiring, we spent great time together. All the very best in your life ahead," tweeted Afridi on Monday.

Also Read: Yuvraj will be remembered for years to come: Shoaib Akhtar

Arguably, one of the greatest players to have donned the blue in white-ball cricket, Yuvraj was diagnosed with mediastinal seminoma, a germ-cell tumour located between his two lungs just after he helped MS Dhoni-led India clinch their second World Cup on home soil.

Yuvraj, now 37, hit four half-centuries and a century, while also picking up 15 wickets -- including a five-for against Ireland -- on his way to the Man of the Tournament award to star for the Men in Blue in the showpiece event in 2011.

The cancer diagnosis was confirmed in February 2012, after which Yuvraj stayed away from the game till December that year, when he made a comeback following treatment.

It was not a memorable comeback for the dashing southpaw, who was more than a handful with his left-arm spin. Yuvraj last turned out in national colours in June 2017 in an ODI during India's tour of the West Indies.

In the longest format of the game, Yuvraj was not so effective, scoring three centuries and 11 half-centuries and aggregating 1900 runs, and in T20Is -- where he headlined India's 2007 title-winning effort with a blast of six sixes in a Stuart Broad over -- he ended with 1177 runs and 28 wickets.