Kolkata Knight Riders' (KKR) young players were the stars of the show once again on Wednesday as they beat Rajasthan Royals (RR) by 37 runs and captain Dinesh Karthik couldn't be happier for them. 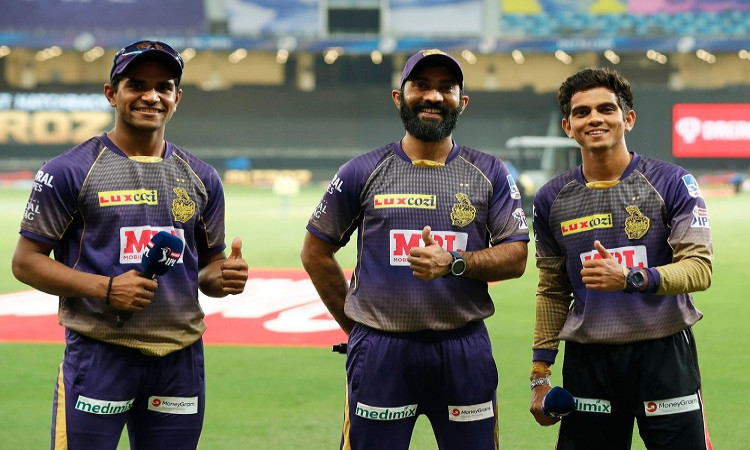 After 21-year-old Shubman Gill earlier starred with an unbeaten 70, Shivam Mavi, 21, and Kamlesh Nagarkoti, 20, starred with the ball at the Dubai International Cricket Ground on Wednesday.

Also Read: Few Of Us Thought We Were Playing In Sharjah: Steve Smith

"It's a very special thing - these boys, the journey they've gone through when not playing, and for them to just come out and express themselves with the ball and ball was incredible," said Karthik in the post-match presentation ceremony.

While Nagarkoti recorded figures of 2/13 in the two overs he bowled, Mavi returned 2/20 in four overs and was declared player of the match. The two were crucial in ensuring that RR was restricted to a meager 137/9. Gill was the top scorer for KKR with 47 off 34 as they scored 174/6.

Mavi said that he stuck to normal lines and lengths in the beginning as the ball was seaming around. "It was a little different after seeing the wicket, thought it would be flat. But it was seaming around so I kept it tight. I've played against some of these big players before so I knew what they would do, so I made sure I just stuck to the lines and lengths," he said.