You had a great World Cup, Sachin told Kane after New Zealand loss

London, July 18 (CRICKETNMORE):  "Your game was appreciated by all and you had a great World Cup," said Sachin Tendulkar to Kane Williamson while handing him the Player of the Tournament trophy after 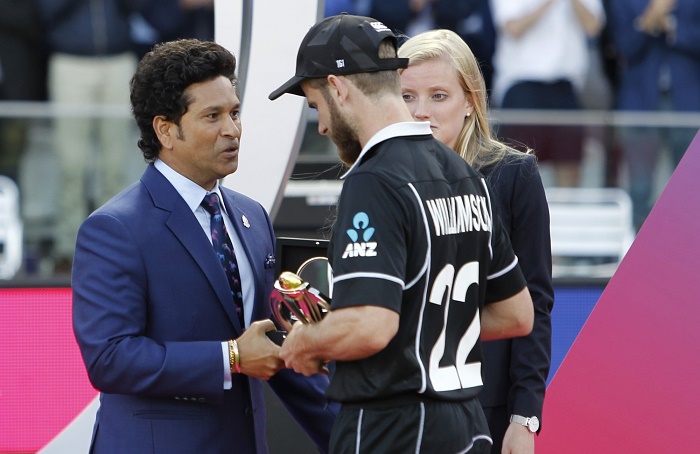 London, July 18 (CRICKETNMORE):  "Your game was appreciated by all and you had a great World Cup," said Sachin Tendulkar to Kane Williamson while handing him the Player of the Tournament trophy after New Zealand lost a thrilling final of the 2019 edition of the showpiece event.

And at the post-match presentation ceremony, Tendulkar did not mention anything about the ill luck, the Super Over or the boundary count rule which denied Williamson the opportunity to have his hands on the coveted trophy.

Williamson scored 578 runs in the tournament -- the most by a captain in a World Cup -- and Tendulkar said it was the calm demeanour of the Black Caps skipper which was responsible for his success.

"The best thing about Williamson is ability to stay calm. He doesn't lose his composure in any circumstance. It was unfortunate that he could not win the World Cup but it did not reflect on his face," Tendulkar told 100Mb.

The legendary Indian batsman said Williamson has a unique style of captaincy. "Williamson sees the game from an entirely different perspective. His field placements, bowling changes while defending a low score are commendable. Even when (Ravindra) Jadeja was playing big shots in semi-final, he was calm and in the end, the result was in his favour."

The 46-year-old named Williamson the captain of his favourite XI of the 2019 World Cup, which includes five Indians.