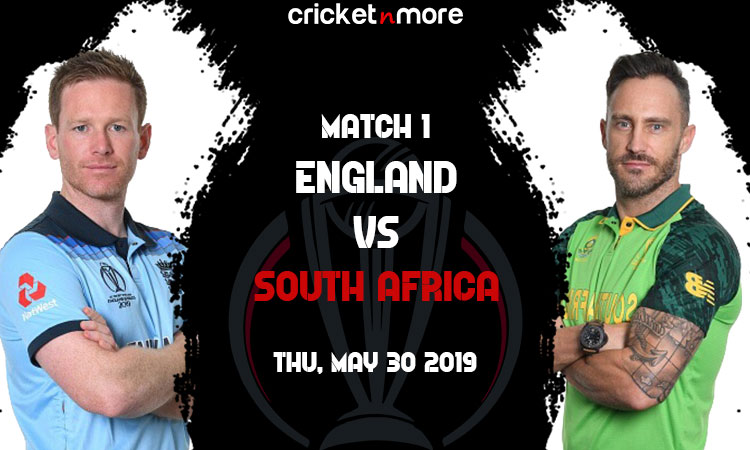 May 29 (CRICKETNMORE) Hosts and hot favourites England will know this is their best chance to lift the crown for the first time, when they take on perennial underachievers South Africa in the World Cup opener at The Oval here on Thursday.

England, who are still in search of their first trophy like South Africa, have risen from the ashes of their poor campaign in the showpiece last time, following that group-stage exit by ascending to the summit of the ICC ODI rankings.

Eoin Morgan's side boast of the most dominant batting unit in 50-over cricket and their bowling too oozes the firepower few teams can rival.

Such has been England's dominance that their 4-0 whitewash of Pakistan earlier this summer meant the Three Lions haven't lost a multi-game series for two-and-a-half years.

In the warm-up games, England faltered in their first outing losing to fellow title contenders Australia before chalking up an easy win over lesser lights Afghanistan.

But other teams would very well know that these matches mean little when it comes to tournament proper where the English bat as deep as anyone with the likes of Jonny Bairstow and Jason Roy boasting the highest strike-rates of any openers in ODI history to have posted more than 1,000 runs, yet still have the highest average of any pair topping the order in the competition.

Joe Root is one of the world's best batters in all formats with skipper Morgan, in-form Jos Buttler, all-rounder Ben Stokes following him to lead a talent-laden cast of cricketers.

In men's ODI history, only 20 players have ever averaged over 25 with the bat at a strike-rate over 100. Four of them -- Buttler, Roy, Bairstow and Moeen Ali -- currently play for England.

England's bowling might not be as breathtaking as their batting, but with the inclusion of Jofra Archer -- who has just qualified to represent the team but was fast tracked into the fold -- their pace battery could make a considerable difference.

On flat decks, spinners could play a role and it is then that leggie Adil Rashid comes into the picture, having taken more wickets than any other bowler since the tournament's 2015 edition.

Talking about South Africa, the Proteas received a body blow on Tuesday as pace spearhead Dale Steyn was ruled out for the first game with a shoulder injury.

South Africa, always considered one of the favourites, have also had injury concerns over their two other main strike bowlers, Lungi Ngidi (side) and Kagiso Rabada (back), though both played in the warm-up win over Sri Lanka last week.

Branded as 'chokers' due to their failure to make the final despite making the knockouts of every edition they have participated in -- barring 2003 when they were also the hosts -- the Faf Du Plessis-led side this time have one of the best bowling units of the tournaments but lack depth in their batting.

In pacer Rabada, South Africa have one of the best in the business and the wily old fox Imran Tahir also adds variety with his deadly leg-spin.

As far as their batting is concerned, Du Plessis will have to shoulder a lot of responsibility along with stumper batsman Quinton de Kock. Hashim Amla's international career appears to be winding down as this could be his last World Cup.

Rassie van der Dussen has had a terrific rookie year so far, with four half-centuries in his first eight ODI innings. Aiden Markram, 24, has already captained South Africa, and 23-year-old Andile Phehlukwayo adds value in more ways than one, with his all-round capabilities.

Overall, many experts have said this will be the most exciting World Cup in recent times with each of the ten teams playing each other in a marathon round robin format. Besides England, Virat Kohli's India and Aaron Finch's Australia are the other favourites with West Indies and New Zealand tipped as the dark horses.

There will be considerable focus on Steve Smith and David Warner as the pair are making a comeback into international cricket since their ball tampering scandal in Cape Town last year. Former Aussie skipper Smith was booed during a warm up game and this could be the norm as they look for their sixth title.

Kohli's India, boasting of perhaps the best bowling attack in the tournament with Jasprit Bumrah in their ranks, are also expected to fire on all cylinders with the hype they have brought along. Arguably the best batsman of his generation, 31-year old Kohli will also look to make this World Cup his own by racking up runs.

Former captain M.S. Dhoni could be playing his last World Cup but at 37, he showed no signs of ageing in the warm-up game against Bangladesh by scoring a brilliant century (113 of 78).

With run fests expected in every other game, there could be upsets along the way too as Afghanistan showed by beating Pakistan in the first warm-up.

The Windies posted a total of more than 400 against New Zealand, in a game where more than 750 runs were scored in less than 100 overs.

This will also be a World Cup where many first timers like Afghanistan star spinner Rashid Khan and Bumrah, who have already made a name for themselves, will want to make it count.

Unfancied Pakistan, who have done precious little since their 2017 Champions Trophy win, Sri Lanka and Bangladesh will look to shrug aside the tag and over perform. Debutants Afghanistan have nothing to lose and will be expected to express themselves freely.