Women's Ashes Test: Match Ends In A Thrilling Draw As England Suffer A Collapse On Day 4

The one-off Test in the women's Ashes ended in a thrilling draw as England managed to survive the last two overs with one wicket in hand against Australia at the Manuka Oval on Sunday. The narrow 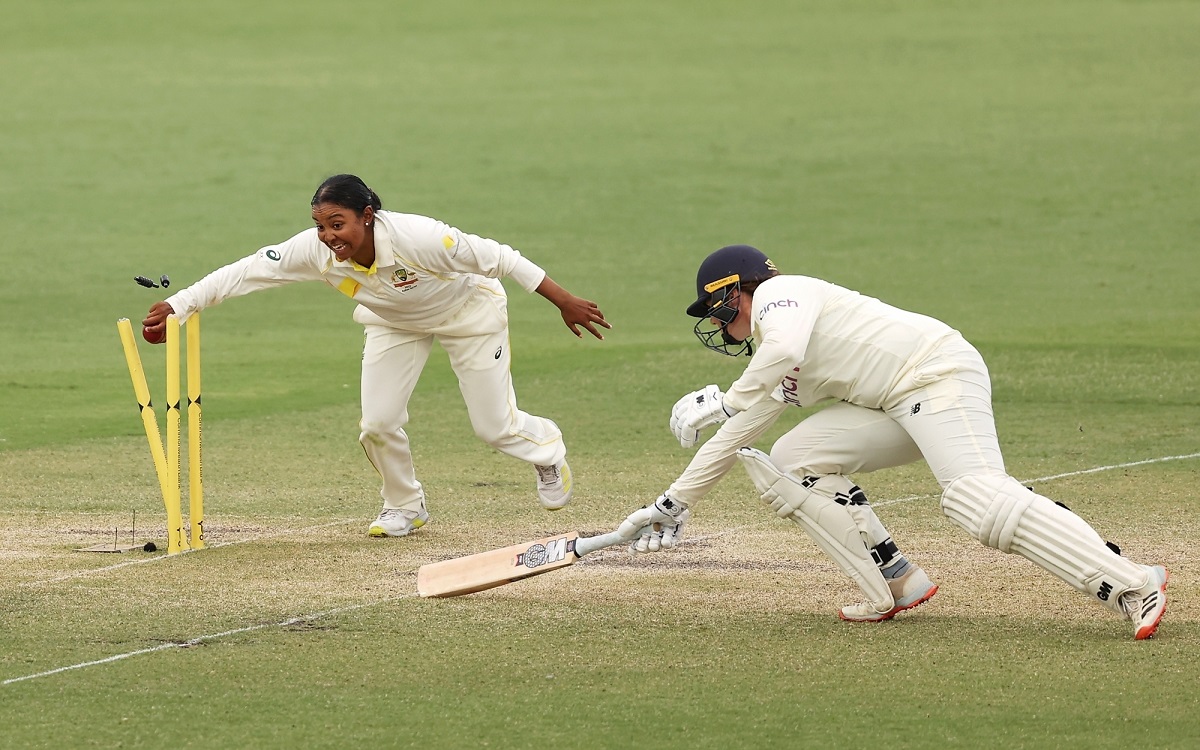 The one-off Test in the women's Ashes ended in a thrilling draw as England managed to survive the last two overs with one wicket in hand against Australia at the Manuka Oval on Sunday. The narrow draw meant that the women's Ashes is still alive with a three-match ODI series still left to play. The match also makes up for a strong case to have more women's Test matches in future, with the duration being extended to five days.

After Australia declared at 216/7 to set England a target of 257 off 48 overs, the tourists took on the challenge with aplomb. Tammy Beaumont was quick off the blocks, hitting seven boundaries to get 36 off 42 balls before Rachael Haynes at cover plucked a catch out of thin air to send the right-hander back to the dressing room.

Lauren Winfield-Hill, sedate till then, began to quicken up in company of captain Heather Knight till Rachael took a catch at mid-wicket on Ellyse Perry's bowling to end her stay at 33. At 94/2, Heather and Nat Sciver joined forces for an aggressive stand full of boundaries and strike rotation to get England close towards the target.

With 104 needed off 17 overs, Australia brought a twist in the match as Darcie Brown trapped Heather plumb in front of the stumps. The captain went for the review but replays showed ball hitting the stumps. Sophia Dunkley played a blinder of a knock to keep England in the hunt for chase. She hit back-to-back boundaries off Darcie before smoking Annabel Sutherland for successive sixes.

Nat reached her fifty and looked great till England lost their way sensationally. Annabel had Nat caught while pulling at square leg for 58, before returning in her next over to dismiss Amy Jones for four at long-on. Alana King, in her debut Test, removed Sophia on 45 off 32 balls with Beth Mooney taking a brilliant catch at long-on.

Annabel returned to take out Katherine Brunt with an edge behind to keeper Alyssa Healy while Alana effected a run-out of Anya Shrubsole and then dismissed Charlie Dean to leave England nine down with 2.1 overs left. Sophie Ecclestone and Kate Cross batted out the remaining balls to force a draw after England lost six wickets for 27 runs out of nowhere.

Earlier, Australia, resuming from 12/2 on day four, saw Beth and Ellyse steady the ship. The duo put on a 91-run partnership and were aided by generous drops (Beth at 40, Ellyse at 35) and mix-ups. Though Ellyse was trapped lbw by Sophie on 41, Beth marched on to reach her half-century before being trapped plumb lbw by Charlie for her maiden Test wicket.

Post lunch, captain Meg Lanning fell to Katherine Brunt, edging to first slip for the pacer's ninth wicket in the Test match. Ashleigh Gardner (38), Tahlia McGrath (34) and Jess Jonassen (14 not out) picked up the scoring rate with boundaries to set up Australia's declaration.

The bold declaration left England with a record chase and they did come really close, thanks to the efforts of the top five before losing their way suddenly but managed to hold on to the draw. With the Ashes scoreline now 6-4, the ODI series will now decide who will take the series.