Winning the World Cup means the world to us: England skipper Eoin Morgan 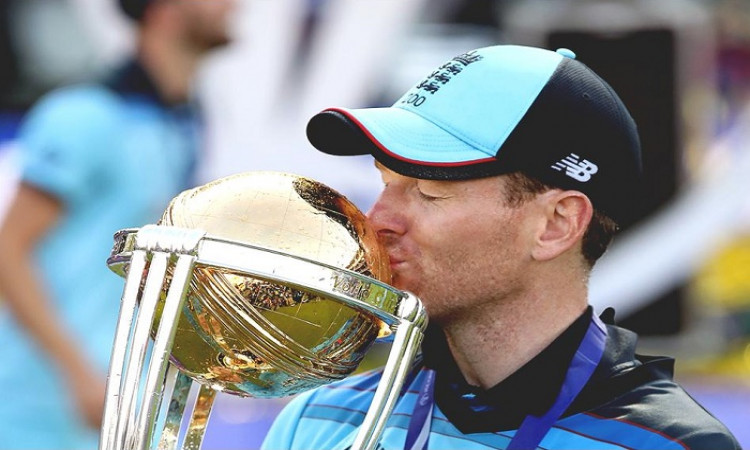 London, July 15 (CRIKETNMORE):  An elated England captain Eoin Morgan said to get over the line and win their maiden World Cup means the world to them, after the hosts beat New Zealand in an eliminator here at Lord's on Sunday.

It took England 44 years but on Sunday, in their own backyard, Morgan and Co. lifted the sport's biggest prize albeit by the finest of margins as the Super Over also ended in a tie and England won due to hitting more boundaries than new Zealand.

Electing to bat first New Zealand put up 241/8 in 50 overs. Chasing the target, England rode player of the match Ben Stokes' unbeaten 84 off 98 balls with Jos Buttler also scoring 59. The pair added 110 runs for the fifth wicket to tie the game at 241 all out and take it to a Eliminator.

In the Eliminator, Stokes and Buttler helped England post 15 which New Zealand matched but in gut-wrenching fashion fell behind due to less number of boundaries hit to England.

"I'd like to commiserate Kane (Williamson) and his team. The example that they lead is hugely commendable to him and his team," Morgan said moments before lifting the World Cup at the gala post match presentation ceremony.

"On a tough wicket where everyone found it tough to score. Buttler and Stokes put together a partnership, and I thought that would take us deep, and it did. This has been a four-year- journey - and we find it hard to play on wickets like that."

To get over the line today means the world to us," Morgan said, his eyes welling up.

"I was being cooled down by (Liam) Plunkett, which isn't a good sign. Some of the support staff - not only the best in our team, but in the world, they really helped. Full credit to the two boys who went out for the Super Over, given that they were there most recently.

On Jofra Archer who bowled the Super Over, Morgan said the 24-year old is improving every game. Archer finished with 20 wickets in 11 games as England's leading wicket taker and third in the overall list behind Australia's Mitchell Starc and New Zealand's Lockie Ferguson.

"(Jofra) Archer just improves every time he goes out there. Really incredible - everyone in the changeroom today, (David) Willey, (Sam) Billings, whoever missed out on the squad - I'd like to mention them too," Morgan added.