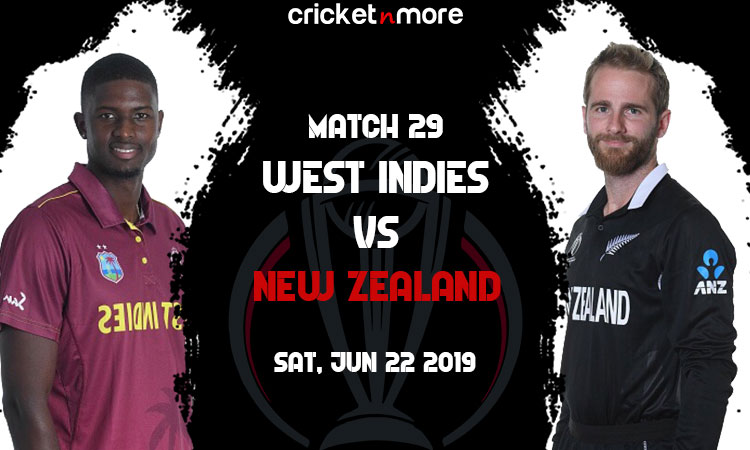 June 21 (CRICKETNMORE) With their backs against the wall, West Indies will take on in-form New Zealand in a must-win World Cup clash on Saturday.

The Windies have looked more in T20 mode this World Cup with their batsmen losing patience too early and getting out, barring Shai Hope who has looked solid. The Jason Holder-led side started their campaign on a high, thrashing Pakistan by seven wickets.

But since then, the Caribbean side has been on a downward slide losing three games -- against Australia, England and Bangladesh -- with the game against South Africa being washed out.

The West Indies are currently lying seventh in the 10-team standings with just three points in their bag.

A defeat against New Zealand, who are the only team besides India to have remained unbeaten so far, would all but end their hopes for a semi-final berth.

Against Bangladesh, West Indies posted 321/8 but their poor bowling effort saw Bangladesh gun down the target in 41.3 overs with seven wickets in hand.

Chris Gayle, one of the Windies' batting pillars, hasn't clicked so far and Andre Russell has been a flop too. Evin Lewis, Hope, Shimron Hetmyer and Holder have been the ones scoring the runs but their bowling has been a cause of worry.

New Zeland have been in great shape, sitting pretty at second spot with nine points, which includes four wins out of five games with the match against India being washed out.

The Kiwis, led by the brilliant Kane Williamson, have so far beaten Sri Lanka, Bangladesh, Afghanistan and South Africa.

But Williamson and Co. will know their real test starts now. While they will start favourites against West Indies, they will have three tough encounters against Pakistan, Australia and England.

In their last encounter against South Africa, Williamson's class came to the fore as he scripted a match-winning knock of 106 not out to guide the Black Caps past the line in a tense final over finish while chasing a modest 242-run target.