Will Adam Zampa's Wrist Award The Australians With World Title Against New Zealand?

In a game lasting just 21.2 overs, it would have been difficult to zero in on one player as the standout performer. As Australia crushed Bangladesh by eight wickets in the ICC Men’s Twenty20 World Cup Group 1 game in Dubai on Thursday, it was a no-brainer to pick Adam Zampa as that bowler over pacemen known to relentlessly hunt sides down 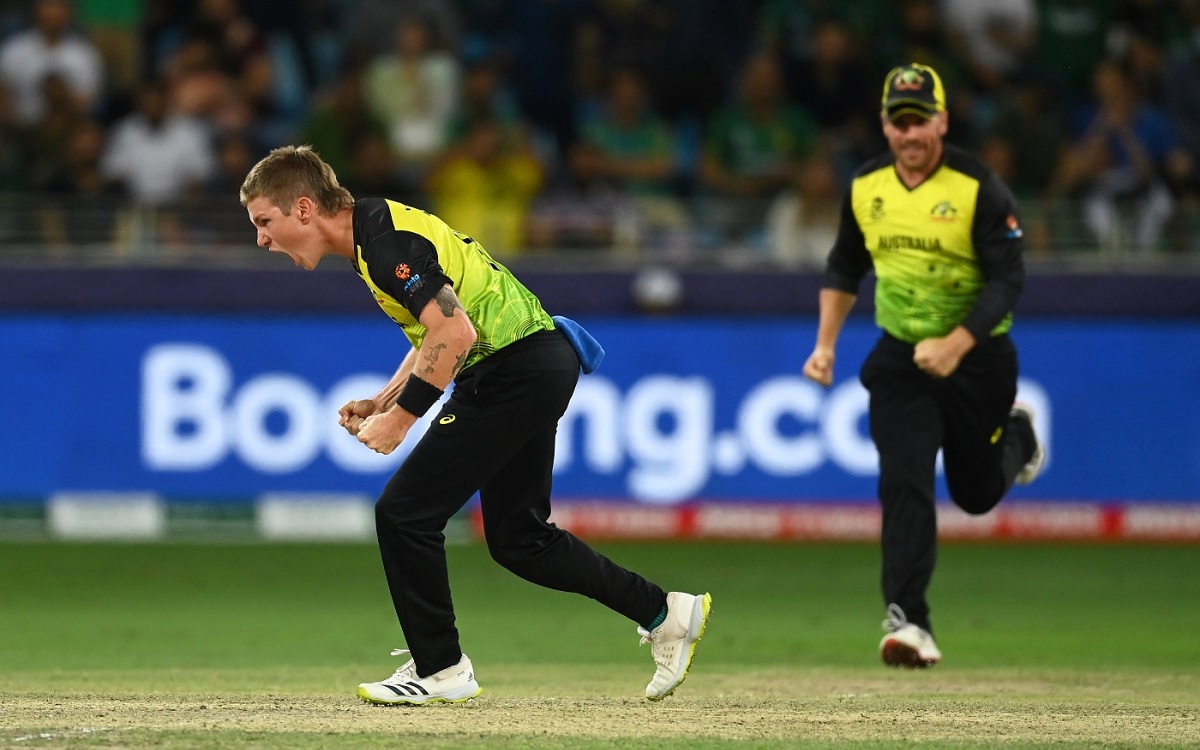 The manner in which he kept things simple was illustrative of his thought process. It would have been the easiest of things for a bowler of his type, given the awareness that the Bangladesh innings was already hurtling to an early end, to attempt expansive stuff with the cricket ball. He stuck to the basics of a workman’s discipline rather than set off an artist’s creative path.


New Zealand's Excellence In The Powerplay Is A Potential Challenge For, Says Aaron Finch Ahead Of The T20 World Cup Final Clash

The use of the crease and the variation Zampa brought into play with his deft wrist work were the key factors that allowed him to prey on the already muddled minds of the Bangladesh line-up. It is the sort of performance that would have brought a smile of all practitioners of a difficult art of wrist spin, irrespective of their nationalities.

The 29-year-old saw great value in staying on the beaten track and resist the temptation to go on an adventure when presented with the situation. He eschewed thoughts of experimentation recognised that he had to quickly hammer in a few nails with his googlies and top-spinners so that Australia could boost their net run rate. This enhanced the quality of his work on Thursday.

Of course, he imparted ample spin to fox the directionlessBangladesh middle and lower-order with turn and bounce. Mustafizur Rahman was the only one who slogged a catch to long-on. Mahedi Hasan was deceived by a short delivery that seemed to gather pace upon pitching and was caught plumb in front. The other three batsmen edged catches and made their way back.

The four sensible overs that he sent down in picking up a haul of five for 19 earned him his second Man of the Match award in eight days, but of greater significance will be the fact that each of his five such awards have come after good bowling against Asian teams, expected to be dominant players of spin bowling.

Yet, despite the maiden five-wicket collection in international cricket, Zampa was the first to admit that the white ball did not always land where he wanted it to. But the Bangladesh innings, tottering by the time the leg-spinner with the flowing mane got to the bowling crease, was on such a self-destruct mode that he did not need to be at his accurate best to claim many scalps.

His cup of joy would have flowed over had Matthew Wade been able to latch on to a sharp chance that came off the edge of Taskin Ahmed’s blade. That would have completed a Zampa hat-trick across overs but the extra bounce and pace deceived the batsman off the track and also the wicket-keeper’s super sharp reflexes.

Despite that, the leg-spinner ended up doubling his tally of wickets in the tournament to 10 from four games and is easily the leading wicket-taker so far for Australia and in the Super 12 stage across all teams. It places him in a position of greater responsibility as the side will want his craft to reap rewards whenever he is brought on to bowl in the limited-over formats.

He has been plying his trade efficiently in the 117 white ball matches that he has played for Australia before Thursday’s contest, claiming 154 wickets. Though he may have bowled better in many of those games, Thursday’s may quite be the breakthrough spell that will raise expectations from him.

Australia has reason to be pleased that Zampa now covers an important base on tracks that are getting weary. To have a wicket-taking spinner back the potent fast bowling unit is extra ammunition to pile the pressure on the opposition batting. Bangladesh was at the receiving end of a leg-spinner feasting on the fizz afforded by the pitch in terms of bounce and pace.

On Thursday, Mitchell Starc and Josh Hazelwood heaped misery on the Bangladesh frontline batsmen in the powerplay overs. Starc and Hazelwood’s extra pace caused so much discomfort to the Bangladesh top-order that even Glenn Maxwell’s steady off-spin also found reward inside those six overs.

It leaves the side from Down Under to aspire for its own batting to fire effectively as it seeks to extend its stay in the tournament. It is only fair that Australia would expect left-handed opener, David Warner, to find form and consistency in the tougher battles that await the team in the next few days.