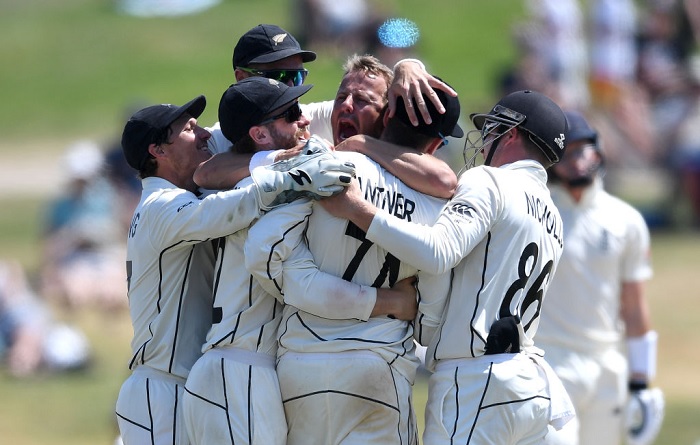 Resuming their second innings at 55/3, none of the England batters could stay long at the crease as they got bowled out 197 in the final session of Day Five at the Bay Oval and suffered a crushing defeat by an innings and 46 runs.

Left-arm pacer Wagner, who had taken three wickets in the first innings, was the tormentor in chief in England's second essay as he picked up a fifer, giving away 44 runs in his 19.3 overs.

Joe Denly (35), Rory Burns (31) and Jofra Archer (30) were the only England batters who could stay for a while at the crease but their efforts couldn't avoid the defeat.

Archer, along with Sam Curran (29), did delay the win for the Black Caps. However, it was too much a task for the lower-order batters as the hosts took a 1-0 lead in the two-match series. Santner also took three wickets in the second innings.

Earlier, New Zealand had posted a mammoth 615/9 declared in their first innings, riding on the double century from Watling and ton from Santner in reply to England's 353.

The two teams will now face in the second and final Test beginning Friday at the Seddon Park in Hamilton. The two-Test series is not a part of the ICC World Test Championship and thus results will have no bearing on the points table.