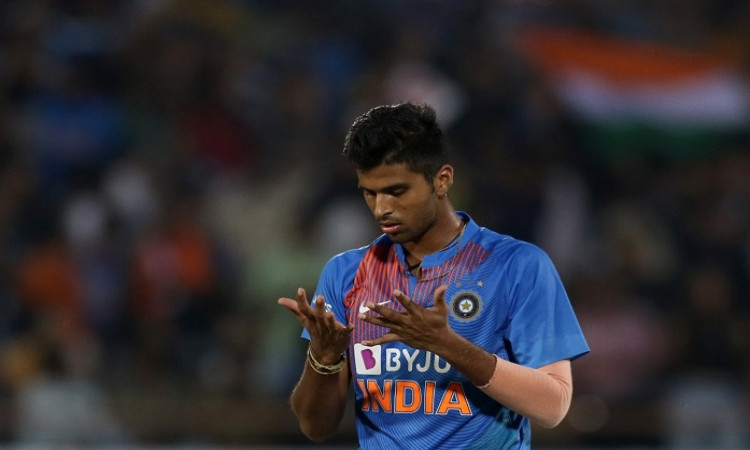 Rajkot, Nov 8: Following India's convincing eight-wicket victory over Bangladesh in the second T20I, off-spinner Washington Sundar has exuded confidence on the hosts winning the final T20I to clinch the series in Nagpur.

India had lost the series opener in the national capital after they failed to defend 149 on a sticky Kotla wicket.

However, on Thursday evening, India first restricted Bangladesh to a below-par 153/6 and then rode on skipper Rohit Sharma's majestic 85 to chase down the target and level the series at the Saurashtra Cricket Association Stadium.

"We've lost one game and it was a close one. Couple of things here and there and that game could have gone our way as well. We won convincingly today and we can expect a similar track and boundaries in Nagpur so definitely we will look to win the next game," Sundar said at the post-match presser.

Bangladesh, who were sent on to bat, got off to a reasonably good start and had collected 54/0 after six overs. However, they lost their way with spinners Yuzvendra Chahal and Sundar taking full control.

"The spinners' role was important," Sundar said. "It was important to take the pace off the ball and in the middle overs we did a very good job and pulled things back. After the first six-seven overs, it looked like they would get close to 170-180."

While Sundar was exceptional with his figures of 1/25, it was Chahal who bowled the most decisive over of the innings, dismissing Mushfiqur Rahim and a well-set Soumya Sarkar in the 13th over. The leg-spinner returned with figures of 2/28 from his four overs.

Sundar praised the senior leg-spinner and said: "Yuzvendra Chahal is someone who can change the (dynamics) of the game. We've seen him do that a lot in one-dayers and T20s as well. He comes in the middle overs, takes two-three wickets and changes the game.

The two teams will now lock horns in the series-deciding final T20I at the Vidarbha Cricket Association Stadium on Sunday.