Leg-spinner Rashid Khan, who played an instrumental role in SunRisers Hyderabad's first win in the ongoing Indian Premier League (IPL), has revealed that all he tried was to bowl dot balls in order to put Delhi Capitals' batsmen under pressure. 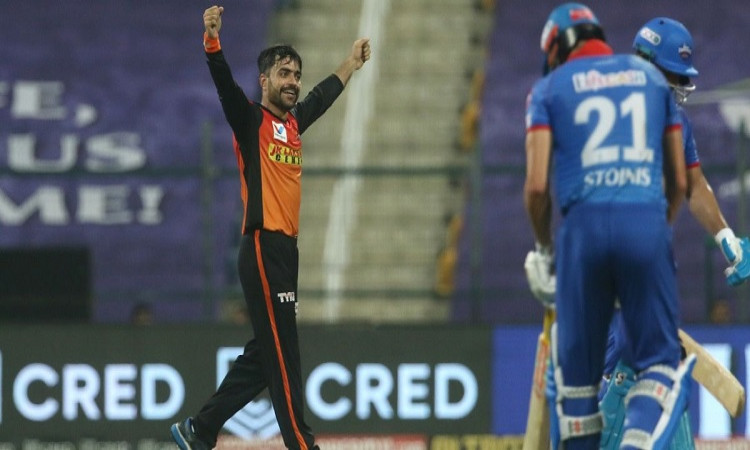 In reply, the Shreyas Iyer-led side never looked comfortable during their chase and could muster 147/7 in their allotted 20 overs, losing the match by 15 runs.

Rashid starred with the ball for the SunRisers as he returned with figures of 3/14 taking wickets of Shreyas Iyer, Rishabh Pant and Shikhar Dhawan.

"Initially, when I bowled my first ball, I was able to get turn, so I realized the ball is turning and I also summarised that the ball is turning more when I am bowling it quicker," Rashid told his teammate Abdul Samad in a video posted on iplt20.com after the match.

"I tried bowling in just the right areas and was looking to bowl dot balls to create pressure on the Delhi batsmen," he added.

Meanwhile, all-rounder Samad - who made his IPL debut against DC - said the six that he hit against Anrich Nortje gave him the confidence to perform well in the upcoming matches.

"Yeah, I felt really good playing my first match in the IPL. I also hit a big six off the bowling of Anrich Nortje, it gave me confidence that I will be able to do good in the coming games. People back home have a lot of expectations from me and I hope to do well," said 18-year-old Samad who scored 12 runs from seven balls.

"Before coming out to bat, the team management had told me to express myself and to play the way I normally do. I started hitting from the first ball, I missed one-two balls, but the six I was able to hit, I got a lot of confidence from that," added the all-rounder from Kashmir.

SRH will next take Chennai Super Kings on October 2 in Dubai.