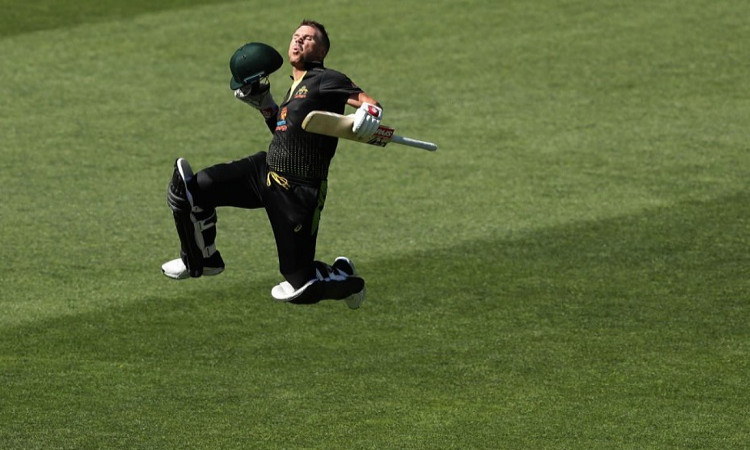 Oct 28 (CRICKETNMORE) David Warner was back to his lethal best on the cricket field as he smashed an unbeaten 56-ball 100 to help Australia canter to 134-run victory in the first T20 against Sri Lanka on Sunday.

Off the pitch, the destructive southpaw, who was celebrating his 33rd birthday, made the day of a young fan even before he started his carnage by gifting him his gloves while returning from practice.

Also Read: When Glenn Maxwell did a Dhoni against Sri Lanka

As he headed to the dressing room, Warner nonchalantly handed over his pair of gloves to the young fan who seemed too overwhelmed to react at first, in a video shared by www.cricket.com.au.

"These young fellas won't ever forget their trip to the cricket today. All class from David Warner," said the message along with the video.

Warner on Sunday achieved another feat as he became the only third Australian cricketer to smash international hundreds in all three formats.

Speaking after the match, the Aussie opener said: "It means a lot to contribute to the team and put us in great position. It was a good milestone, but got a great total on the board and it's always tough to chase a big one in Australia. Sometimes it will be tough with no rotation of strike. One of us had to go hard against the new ball. (Sri Lankan bowler Nuwan) Pradeep's skills are excellent, he's a world-class Test player, I reckon."

"You forget how busy the schedule actually is. You always get good support here in Australia. We thrive on people coming and watching u," he added.

This was Warner's maiden T20I ton and the destructive southpaw hit eight fours and three sixes in his innings.