Dharamsala, March 29 (CRICKETNMORE): Australian skipper Steve Smith, who has shown his class in the Test series against India, on Tuesday said he wanted to lead from the front on the Indian tour. India-Australia series will be remembered for fantastic cricket Says Simon Katich 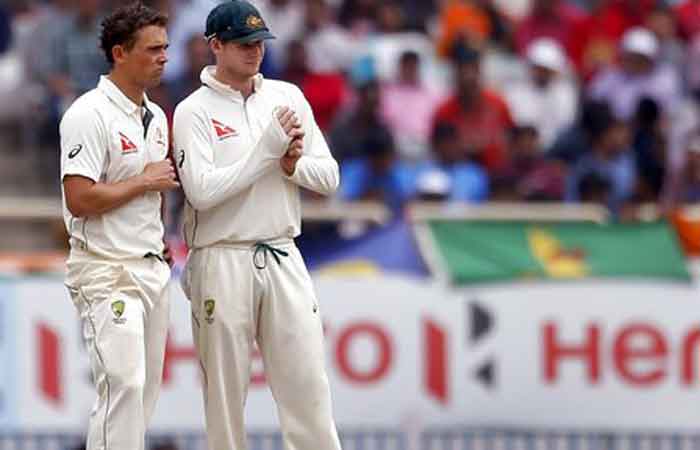 Smith played a gritty 111-run knock in the first innings of the fourth and final Test match but failed in the second innings.

The series witnessed several controversies with players from both sides indulging in intense verbal duels both on and off the field.

Smith, who was involved in confrontations with several Indian players apologised for losing control during the course of the Test series.

"I've been sort of very intense in my own little bubble and at times I've let my emotions and actions (to) just falter a little bit," the 27-year-old said.

"I apologise for that throughout this series and that's a big stride forward for me and something I can really learn from and continue to grow as an individual and as a leader," he added.

Commenting on the second innings collapse in which the visitors were bundled out for 137 with Glenn Maxwell (45) emerging as the highest scorer, Smith said:" I'm not really sure at this present time. (Did not have) time really to think about it yet. That can certainly happen here in India. We can lose wickets in clumps and I guess that it is what we do as a team, trying not to do that."

"So from that aspect it is disappointing that we did lose wickets in clumps and being from 130/1 to all out for 300, that was a bit disappointing.

"I think that is an opportunity from where we could have really driven the game. If we had scored 400 or 450 it certainly would have been a different ball game. So from that aspect it was really disappointing that we were not able to take advantage," he added.

Smith also praised the India style of playing the game. He said that from this series he learned the fact that you have to go with the flow at times in India.

"They have played a pretty aggressive style of game at times and defensive at other times. I gues that is something that I have learned as well that you've got to sort of go with the flow at times here in India and if you build a bit of pressure and get a wicket then things can happen pretty quickly," Smith said.

"I learnt a lot about that in Sri Lanka, in that series we had over there. Playing here a lot about the different tempos of the game and how to handle different situations. Similarly, they play in that sort of way as well.

"They hold and wait for the little opening and once they get the opening they go for the kill. I think that's how they have played in this series," he added.

When asked to comment on the Test series and the loss, Smith said he was disappointed with the defeat but that the team played some quality cricket.

India defeated Australia by eight wickets in the fourth and final Test and clinched the series 2-1 to regain the Border-Gavaskar Trophy.

"Obviously there is a bit of disappointment. We have fought very hard throughout this series and I guess to fall over at the final hurdle hurts and the boys are hurting," Smith said.

"We have played a good style of cricket over here. We have competed in every Test match we played in and for that I'm really proud of the boys.I think we can take a lot from the way we played the plans we had and the way we have done it.

"I think perhaps we needed to do it for just a bit longer at times and be a bit more consistent. We certainly had our opportunities to win the games and we have not taken them. Against a quality of opposition like India, they will get back in the game and make you pay," Smith added.