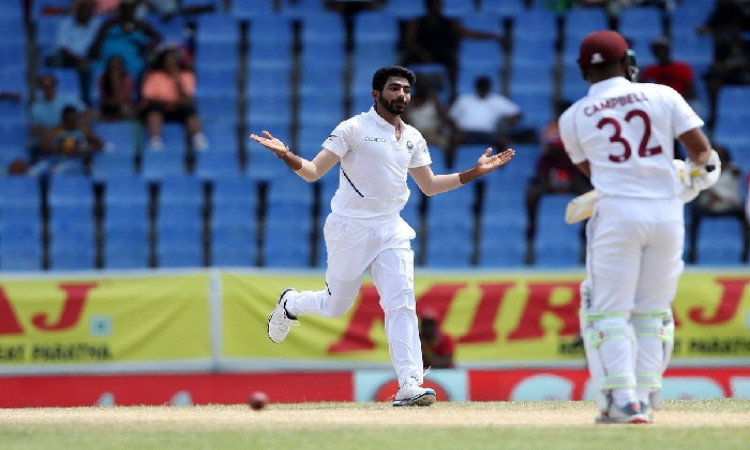 New Delhi, Aug 26: The Indian bowling attack led by Jasprit Bumrah has had world cricket sit up and take note and another example was dished out by the pacer and gang at the Sir Vivian Richards Stadium in Antigua on Sunday when they decimated West Indies for 100 in their second innings after plundering 343/7 declared, to set the hosts a target of 419. It was once again the clinical show of the bowlers that stood out on a wicket that didnt really have any demons in it.

Speaking to IANS, former India opener Virender Sehwag said that it is the consistent show of the bowlers in recent times that has made the Indian outfit world beaters and the No.1 ranked Test team.

"It is not that we didn't have quality bowlers before. In my time we had the likes of Javagal Srinath, Ashish (Nehra) and Zaheer Khan and its great to see the way Jasprit Bhumrah, Mohammad Shami, Bhuvneshwar Kumar and the likes of Umesh (Yadav) -- he has been around for a long time -- have performed. It is good to see the way these bowlers are bowling -- and ensures we are a formidable line-up," he said.

Interestingly, while India decimated West Indies in Antigua on Sunday, Ben Stokes played a blinder in Leeds to snatch victory from the jaws of defeat in the Ashes for England. While he was one of the most destructive openers of his time, Sehwag has always had a special place in his heart for Test cricket and he believes that such performances are definitely brilliant advertisements for Test cricket and the World Test Championship that started with the 2019 Ashes.

"The championship has come at the right time is what I feel. When there are such exciting matches (Ashes) it will be great to have the Test Championships. This will be great for the playing nations and for the format... more exciting and more competitive," he pointed.

At a time when the injury to Steve Smith has had the world talking about protection and how the ICC might wish to look at ways to ensure the safety of players, Sehwag feels that the bowlers also deserve to get some leeway as the rules have already handed batsmen quite an advantage as pacers can bowl only two bouncers in an over in the long format.

"I never used the chest pad in my life... So I don't think I need to use neck pads. Batsmen have the bat in hand, helmet on head, what more do you need? Let's give something to the bowlers," he said.

The batsman, who was once in the news for his alleged differences with regular skipper M.S. Dhoni, feels that the current stories around Virat Kohli and Rohit Sharma are figment of imagination of the media.

"I think these are all media created. They bat together and chit chat when they are at the crease; they also talk to each other when they are fielding in the slips... so I don't see any enmity or fight there. Its all created by you guys," he signed off.