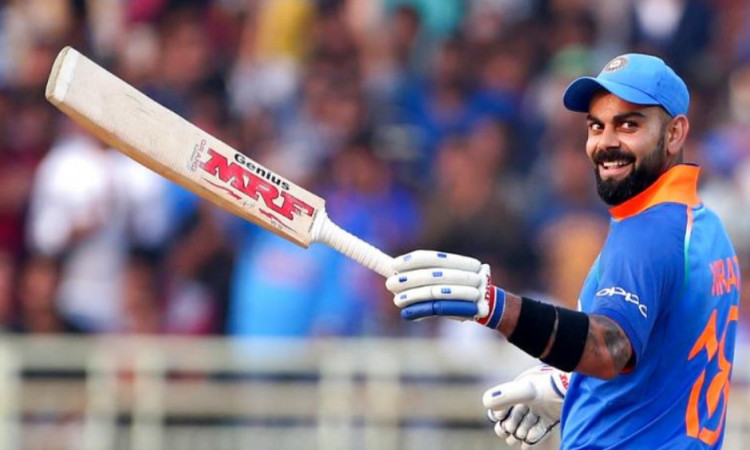 Oct 26 (CRICKETNMORE) 'If we could travel back in time and give our younger selves some advice, what would we say?' The captain of Indian Cricket team, Virat Kohli got an opportunity to share some advice with his teenage self, during the official launch of Super 'V', the animated series based on him. Super 'V' is a 15-year old teenager -- a cricketing prodigy as he discovers his superpowers and goes on to fight the biggest super villain to save the world.

At the press launch of the show, the star cricketer walked down memory lane as he read out an inspiring letter that he had written to his 15-year old self. Wishing his teenage self, he goes on to advise him on the importance of pursuing his passion for the game and to follow his heart.

Also Read: Dhoni keen to give back to Ranchi, eyeing academy in hometown

He also speaks about managing matters of the 'heart' while maintaining important and trustworthy friendships. He promises a great future if he keeps his eye on the ball and emphasizes that he needs to retain all the values he has been taught and appreciates the love and support of his parents.

Present day Kohli appears as the 'sutradhaar' in the series distilling the events of every episode into life lessons that will inspire young India. Incidents from Kohli's own growing up years inspired situations in the series.

Speaking at the launch Kohli said: "It is essential to have a complete upbringing with a good balance of academics and sports. As a teenager, inculcating values such as discipline, leadership and integrity, prove to be stepping stones in developing an individual's overall personality. Everyone would like a chance to go back in time to probably redo or correct a few things. On that note, I had the opportunity to connect with Super 'V' and give him a little clarity in thought. In today's world, children are always looking up to superheroes for inspiration, and I believe Super 'V' aims to send out the right message to young viewers. I am ecstatic to be a part of this concept and to be associated with Star."

The show explores a young Kohli's relationship with his parents and with the world around him comprising his sister, his friends and his teachers. It narrates the adventurous coming-of-age story of a 15-year-old Super 'V' and the various dimensions of adolescence as the character, who, struggles to create an identity for himself -- between his own aspirations, parental expectations and his desire to protect his loved ones.

He is a fun loving yet temperamental teenager who takes the viewer through his adventurous journey while exploring the relationship he shares with his family and friends. The action-adventure series also sees Kohli battle some of the biggest villains.