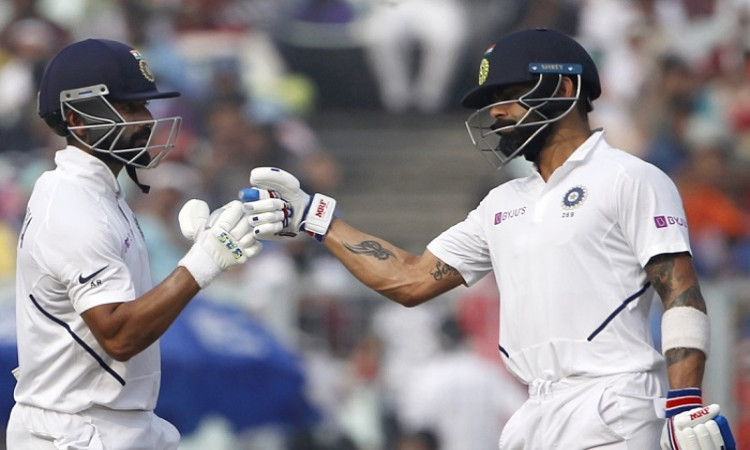 Kolkata, Nov 24:India skipper Virat Kohli and Ajinkya Rahane achieved another feat on Saturday with their 99-run stand against Bangladesh in the historic Day-Night Test at the iconic Eden Gardens here.

The Indian duo's partnership piled misery on Bangladesh on Day 2 as India declared their first innings at 347/9 with Kohli smashing 136 runs, which was his 27th ton in the longest format of the game, while Rahane played a 69-ball 51-run knock.

The partnership helped Kohli and Rahane surpass Pakistan's Inzamam-ul-Haq and Mohammad Yousuf, Sourav Ganguly and Sachin Tendulkar, Mahela Jayawardene and Thilan Samaraweera to become the duo with the second-most runs for the fourth wicket in Test cricket.

Kohli and Rahane are now behind Misbah-ul-Haq and Younis Khan in the list as they have 2763 in just 42 innings while Inzamam and Yousuf had 2677 runs in 50 innings, Ganguly and Tendulkar had 2695 runs in 44 innings, Jayawardene and Samaraweera had 2710 runs in 46 innings.

It was also Kohli's 20th Test century as captain and 41st international century while leading India.