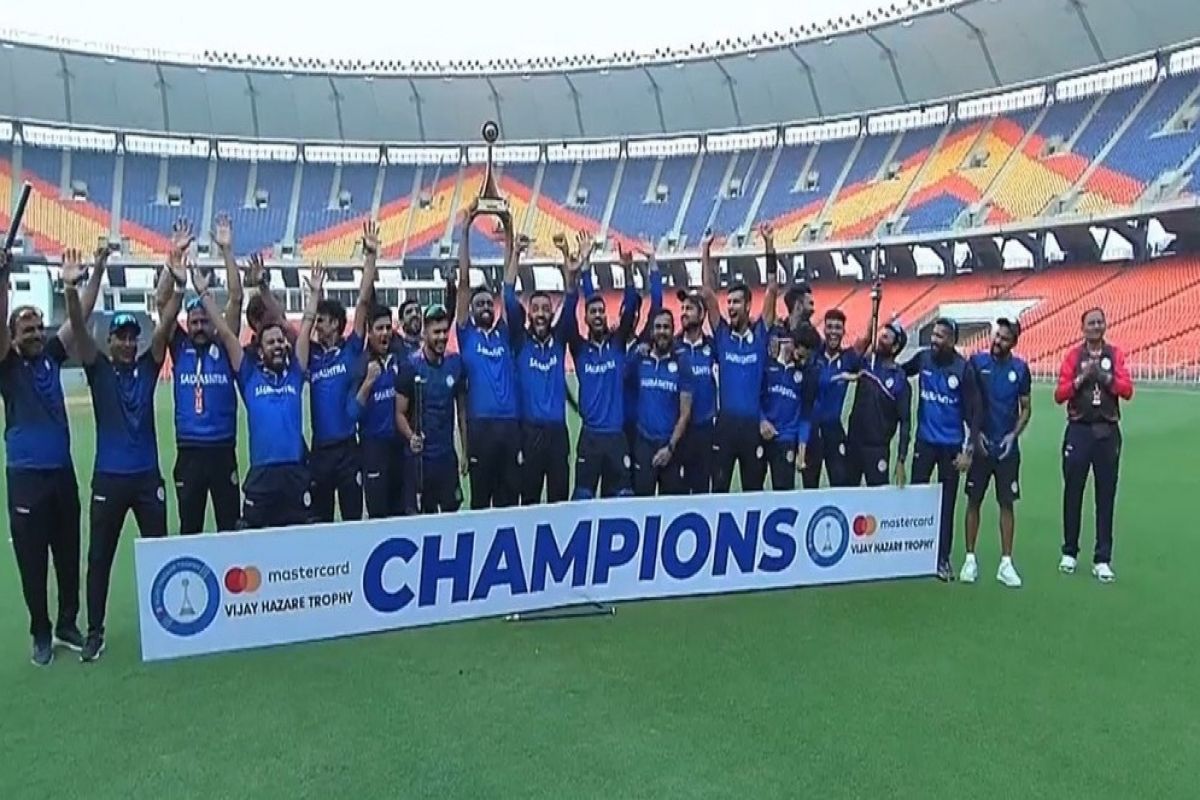 Veteran Sheldon Jackson's fantastic unbeaten 133 not out overshadowed Ruturaj Gaikwad's 108 as Saurashtra beat Maharashtra by five wickets in the final, here on Friday, to win the Vijay Hazare Trophy for the first time since their title triumph in 2008.

Continuing his superb form, Ruturaj hit his third century on the trot and overall four from five games in the 2022 edition of the tournament, but he didn't get ample support from other batters Maharashtra posted a total of 248/9 in their 50 overs.

Chasing a par total, Jackson and Harvik Desai (50) stitched an opening partnership of 125 runs to put Maharashtra on the backfoot. Both openers looked in brilliant touch and scored boundaries at regular intervals to bring their century stand in 21 overs. Jackson reached his fifty in 66-ball while Desai got it in 61 deliveries as Saurashtra were in control of the chase.

It was Mukesh Choudhary, who tried to get Maharashtra back in the game with two wickets in the 27th over, removing Desai and Jay Gohil. Samarth Vyas was dismissed by Vicky Ostwal a few overs later, leaving Saurashtra at 147/3 in the 33rd over.

However, Jackson continued his sensible batting and got to his hundred in the 37th over. At the other end, Prerak Mankad did not have a productive outing as he got out for just 1 run.

Eventually, Saurashtra needed 57 to get off the last 10 overs and Jackson and Chirag Jani approached the end overs with calmness, playing risk-free cricket. They collected the singles while Jani struck a couple of boundaries, keeping the required rate under control. In the end, Jackson hit a six and a four off Manoj Ingale in the 47th over to win the title for Saurashtra.

Earlier, put into bat, Maharashtra lost Pavan Shah early to a run-out and could manage only 18 runs in the first 10 overs. Gaikwad, who was on 4 off 32 deliveries at that stage, managed his first boundary only in the 17th over when he swept a Dharmendrasinh Jadeja delivery over backward square leg.

He hit a short ball from Kushang Patel for a six to provide some much-needed impetus to his innings. The second wicket partnership of 66 runs, came to an end in the 25th over when Bachhav miscued a lofted shot to long-on to give Parth Bhut a wicket.

Ankit Bawne joined Gaikwad and the pair smashed a few boundaries to help Maharashtra past 100 in the 30th over. However, Bawne couldn't continue long after that.

Meanwhile, Gaikwad went past 50 soon after and had Azim Kazi for the company as they started playing with a lot more freedom compared to the first half of the innings. The CSK cricketer completed his century off 125 deliveries with two successive sixes off Chirag Jani in the 40th over.

Kazi also cleared the fence twice in the 41st over which was bowled by Bhut. Gaikwad and Kazi added 94 runs for the fourth wicket before the former was run out in the 42nd over. Kazi fell to Mankad a short while later, leaving Maharashtra at 205/5 after 44 overs.

Unadkat, despite going for a boundary in his final over, finished with economical figures of 1-25. Jani picked up a hat-trick in the 49th over, removing Saurabh Navale, Hangargekar and Ostwal with full deliveries. Naushad Shaikh then struck three successive fours off Kushang Patel in the final over to help Maharashtra finish with a respectable total, which was not enough in the end.

Kazi also cleared the fence twice in the 41st over which was bowled by Bhut. Gaikwad and Kazi added 94 runs for the fourth wicket before the former was run out in the 42nd over. Kazi fell to Mankad a short while later, leaving Maharashtra at 205/5 after 44 overs.