, Maharashtra captain and opener Ruturaj Gaikwad hits a brilliant double century, hammered an unbeaten 220 off just 159 balls, while Assam all-rounder Riyan Parag slammed a whirlwind 174 off 116 deliveries to win their respective quarter-final matches in the 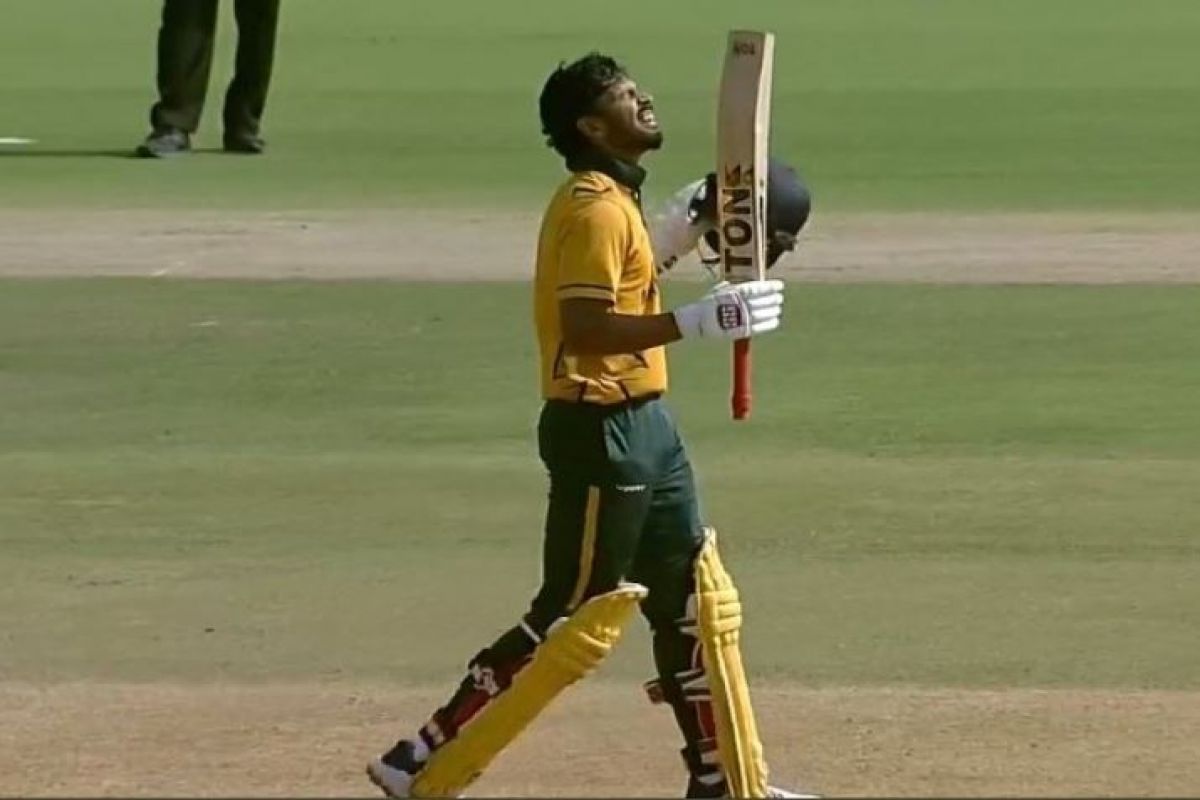 Gaikwad's efforts and Rajvardhan Hangargekar's maiden five-wicket haul in List A cricket meant Maharashtra defeated Uttar Pradesh by 58 runs in the second quarter-final match of the tournament at the Narendra Modi Stadium B Ground in Ahmedabad.

On the other hand, Parag's knock of a lifetime and his career-best effort in List A cricket helped Assam chase down a stiff 351 set by Jammu & Kashmir in the third quarter-final match at Gujarat College Cricket Ground 'A' in 46.1 overs, with his team-mate Rishav Das making 114 not out.

Maharashtra's innings was all about Gaikwad as he hit a mind-boggling seven sixes in an over, the first time it's happened in List A cricket. He got this achievement in the 49th over of the innings, bowled by left-arm spinner Shiva Singh.

As Shiva operated from around the wicket, Gaikwad smashed sixes over deep mid-wicket, straight down the ground, and deep square leg. Shiva then went in with a change in the trajectory, but the result was same as Gaikwad smashed consecutive sixes over long-off fence.

A no-ball was signalled and Gaikwad smacked the ball from Shiva over long-on for another six, also getting the right-handed batter his maiden double century in List A cricket in 153 balls. For the last ball, Shiva went for over the wicket angle, but it made no change as Gaikwad sent it soaring over deep mid-wicket to take 43 runs off the over.

Gaikwad eventually finished on 220 not out off 159 balls, with ten fours and 16 sixes, as Maharashtra made 330/5 in their 50 overs, as 58 runs came off the last two overs. Shiva, who was at the receiving end of Gaikwad's assault, finished with 0/88 from nine overs.

Rest of the Maharashtra batters combined to make just 96 runs off 142 balls, though Azim Kazi (37) played the second fiddle in stitching a 146-run stand off 107 balls with Gaikwad for the fourth wicket.

Gaikwad taking 43 runs from that over off Shiva made it to the record books of most expensive over in List A cricket, equalling the combined effort of Brett Hampton and Joe Carter, off Willem Ludick, for Northern Districts against Central Districts in a Ford Trophy game in New Zealand in 2018.

He also became the first Indian batter to make 43 runs off an over in List A cricket. Gaikwad, 25, also became the second batter in the ongoing edition of the Vijay Hazare Trophy to reach the double-century mark after Tamil Nadu's Narayan Jagadeesan smacked 277 against Arunachal Pradesh in Bengaluru.

In reply, Uttar Pradesh wicket-keeper Juyal fought a lone battle with 159 off 143, hitting 18 fours and three sixes and had an 112-run stand with Shivam Sharma (33). But rest of the batters didn't turn up as Hangargekar picked 5/53 in is ten overs, to bowl them out for 259.

On the other hand, in a high-scoring quarter-final three, J&K batters Shubham Khajuria and Henan Nazir hit centuries to take the side to a massive total of 350/7 in 50 overs against a hapless Assam bowling attack.

But all those efforts went in vain as Parag continued his red-hot streak with the bat for Assam. He has already scored two centuries and as many fifties in the tournament in the Group stage, and stood up to do the job when his side needed him the most in quarter-finals.

Parag literally toyed with J&K bowling attack, hitting 12 sixes and as many boundaries, especially in the 'V', at a strike-rate of exactly 150 to get his third century of the tournament. His innings had a boundary percentage of 68.97%, with his dot-ball percentage being 36.21%.

He also forged a record 277-run stand for the third wicket with Rishav, who was not out on 114 off 118 balls, laced with 11 fours and a six, to continue Assam's cinderella run in the tournament and end J&K's sparkling run in the competition.

He also forged a record 277-run stand for the third wicket with Rishav, who was not out on 114 off 118 balls, laced with 11 fours and a six, to continue Assam's cinderella run in the tournament and end J&K's sparkling run in the competition.