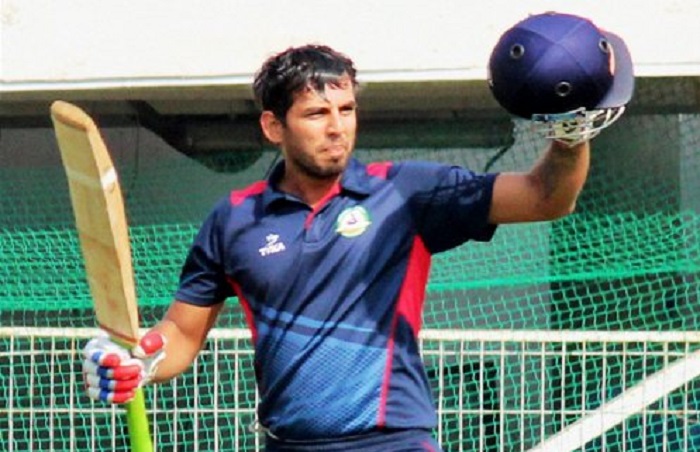 Opting to bat after winning the toss in their Group D opener, Vidarbha rode fine half centuries from Jitesh Sharma (79), Sanjay Ramaswamy (77) and Apoorv Wankhade (51) to pile a mammoth 300 before restricting the opposition for 293/7 despite Saurabh Tiwary (65) and Kumar Deobrat (60) notching half tons.

In another Group D tie, Saurashtra rode on Sheldon Jackson's magnificent 107-ball 106 and India Test star Cheteshwar Pujara's patient 65 to post 286/7 before restricting Chattisgarh for 254/9, to register a 32-run win.

The final Group D match turned out to be lop-sided in favour of Hyderabad, led from the front by skipper Akshath Reddy's quickfire 116-ball 127 and stumper Kolla Sumanth's unbeaten 26-ball 56 to post a mammoth 329/5 against the Services, who failed to tackle the fiery Mohammed Siraj (5/45) to be bundled out for 201 in 40.4 overs.

Mumbai rode on Suryakumar Yadav's unbeaten 85-ball 134 and opener Jay Bista's 90 to pile up a massive 332/5 before bowling out Madhya Pradesh for a meagre 258, with left-arm spinner Shams Mulani returning figures of 4/62.

Andhra gained the crucial four points after losing just four wickets during their chase of Rajasthan's 229/6 in just 45 overs.

In Group B, Delhi, Maharashtra and Himachal Pradesh opened their campaign with wins over Uttar Pradesh, Bengal and Tripura, respectively.

For Bengal, Opener Abhimanyu Easwaran's 103 and skipper Manoj Tiwary's 80 went in vain as Rahul Tripathi led Maharashtra with a scintillating 102-ball 125, to romp home by seven wickets with almost four overs to spare.

Similarly, Yashpal Singh's unbeaten 113 went up in smoke for Tripura as Himachal Pradesh's Amit Kumar fired 101 to help his side to a six-wicket win.