To chase down such a total against Eng was satisfying, says Andrew Balbirnie 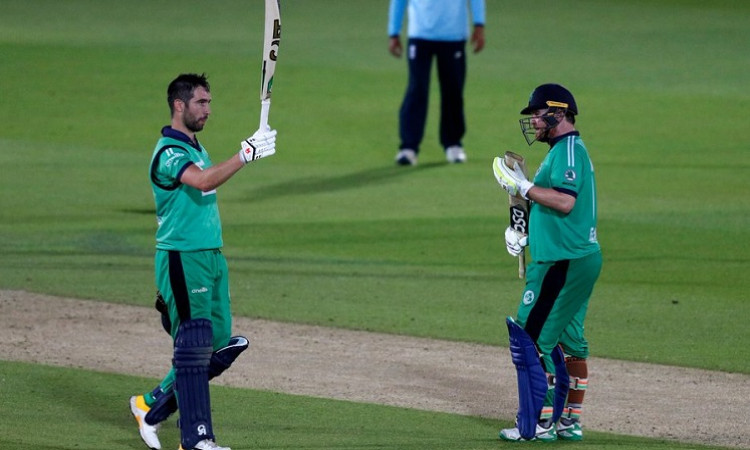 Southampton, Aug 5:  Ireland skipper Andrew Balbirnie heaped praise on opener Paul Stirling after the duo starred in thumping seven-wicket over England in their third and final ODI at the Ageas Bowl on Tuesday.

Riding on centuries from Balbirnie and Stirling, Ireland chased down a mammoth target of 329 with one ball to spare. The visitors also grabbed 10 crucial points in the Cricket World Cup Super League.

Also Read: Cried like a child after Faulkner hit me for 30 runs, says Ishant Sharma

"We didn't perform with the bat at all in the first two ODIs. To come back in the field and to chase down such a total against a good England team is very satisfying," Balbirnie said during the post match presentation.

"(At the halfway stage) We absolutely thought we could chase. We knew that we needed to bat well. We bowled really well, we picked regular wickets which was great and 320-330 we were in the game.

"I tried to be positive whenever I could, obviously it's a different positive the way Paul bats. We created a big partnership which essentially went a long way to winning the game.

England skipper Eoin Morgan, meanwhile, said they missed out on crucial opportunities to win the match. He, however, pointed towards the young players in the side who did well in the series. Their performances were the big positives for the home side, according to Morgan.

"I think Ireland outplayed us today, we had an average day. Being 3 down early, then rebuilding and the guys rescuing later," Morgan said.

"We have more than enough wicket-takers in our group. Stirling had a good day, but we missed out on the opportunities.

"We are learning more and more about the players who are coming in and getting opportunities. Billings with two fifites, Banton with a fifty today. Willey the way he's playing - it seems he has a point to prove," he added.

Stirling was named the man of the match for his blistering 142 but he downplayed his own innings and pointed towards the crucial win that helped them deny England a whitewash in the series.

"It takes a lot of character to come back after the way we lost the first two games. I think it's a combination of lot of things," Stirling said.

"I love batting with Balbirnie, we seem to bat great together, hopefully we'll have many more partnerships in days to come. He's really solid out there.

"It's a nice knock to have under your belt, a win against England in England, but more than the knock - the win counts," he added.

England's David Willey was named the man of the series for all-round show and he expressed his happiness regarding helping the team with the bat as well.

"It's nice to get a go, obviously back in the fold, I'm pretty pleased. Normally, I don't bat for England, which means we are doing well. It's nice to get few runs and get few wickets as well," Willy said.

"I am just happy to get another chance after the World Cup and not getting involved in the winter. All I had to do was come out and enjoy."