Time away from game is helping me now: Hardik Pandya 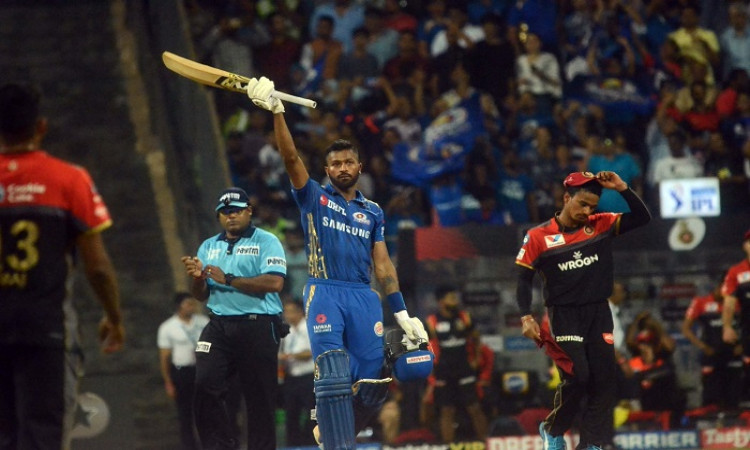 Mumbai, April 16 (CRICKETNMORE) Star Indian all-rounder Hardik Pandya believes his time away from the game, albeit owing to suspension handed over to him for his comments on a chat show, is helping him as he is in a good space right now.

Pandya was handed over a brief suspension for the comments he made on Koffee With Karan last year. However, the Mumbai all-rounder has made a strong comeback and has been performing with both bat and ball in the ongoing edition of the Indian Premier League.

On Monday, he yet again showcased his power-hitting ability as his late cameo of 37 runs off 16 deliveries helped Mumbai Indians defeat Royal Challengers Bangalore by five wickets in their IPL encounter at the Wankhede.

Speaking in the post-match presser, Pandya was asked about learning lessons from the enforced break to which he replied: "Nothing, it was ok. Everyone has a setback and I got to improve."

"It gave some time for my body and game. And the time I was out is helping me right now. I am in a good space and everything is coming together right," he added.

MI needed 22 runs from the last two overs, when RCB captain Virat Kohli handed the ball to Pawan Negi; Pandya was beaten first ball, but he then collected two sixes and two fours off the next four balls to settle the matter.

The 25-year-old further played down his ability to hit the boundaries under pressure and winning games for his side. "I have been doing this for the past four years now. That's my role for any team that I play for. I practice the same thing in nets. It's all about handling situations and if you are smart enough then more often, you will get the result that you desire," he said.

Pandya, who has been included in the 15-member Indian squad for the forthcoming World Cup, believes it is important for him to keep hitting the ball and have the confidence going into the prestigious quadrennial event.

"It's always important to have the confidence because world cup is a big stage and it will be for the first time that I will be playing in it. I was out of the game for some time and it was important to keep hitting," said Pandya.

He also insisted he doesn't want to experiment much and wants to stick to his basics, follow his instincts.

"Cricket is the same whether it's the World Cup or IPL. I have always followed my basics and that's what has got success for me and I will keep backing myself that way," he said.