Tim Murtagh grabs 5 as Ireland bowl England out for 85 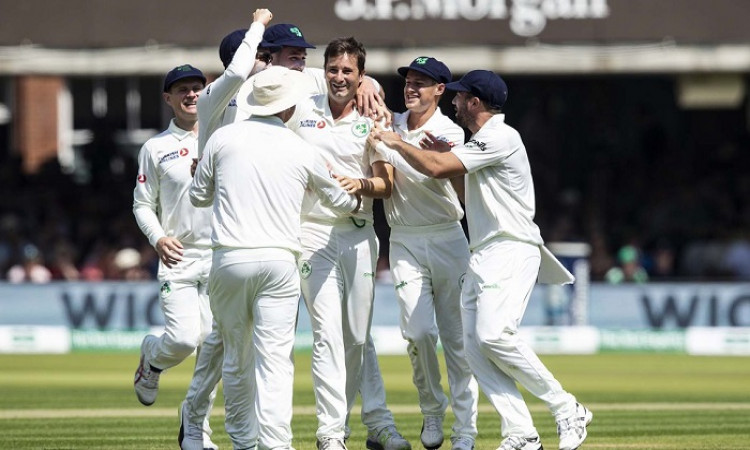 London, July 24:  Ireland, led by Tim Murtagh's maiden five-for, stunned the cricketing world as England was bowled out for a paltry 85 in the first innings of the only Test match here at Lord's, where a little more than a week ago, the hosts lifted the 50-over World Cup.

London-born pacer Murtagh, 37, returned spectacular figures of 5/13 in nine overs as Mark Adair (3/32) and Boyd Rankin (2/5), who became the first player in over seven decades to play Test cricket for and against England, supported him well.

This was Murtagh's 14th first-class five-for at Lord's - but the first to get him on the honours board.

For England, who won the toss and elected to bat on a wicket which had carry and seam movement, Joe Denly top-scored with 23 while 25-year old fast bowler Olly Stone played an entertaining 18-ball 19, his cameo laced with four good looking boundaries.

England, who got past New Zealand on more number of boundaries hit in the rip-roaring final on July 14 where both the match and the Super Over ended in ties, had five World Cup winners in their ranks.

But together, all of them failed collectively as the Irish ran riot at lunch on Day 1 of the four-day affair.

Ireland were at it from the word go with Adair having debutant Jason Roy plumb in front in the second over itself, only for the umpire to call it a no ball.

Roy, who had a brilliant World Cup, could not make the most of the reprieve, getting caught by Paul Stirling at first slip off Murtagh for 5.

Joe Denly looked good for his 23 off 28 balls (4x4) but Adair trapped him in front with a delivery that shaped back beautifully into his pads on a tight line.

Rory Burns (6) was caught behind by wicketkeeper Gary Wilson off Murtagh and England could never recover from there with skipper Joe Root falling for just 2, lbw by Adair.

The five World Cup winners in the England team managed just seven runs among them as Jonny Bairstow, Moeen Ali and Chris Woakes all failed to trouble the scorers.

Ali's wicket was Murtagh's fifer as he and his Ireland teammates rejoiced their finest day yet in Test cricket. Sam Curran scored a quickfire 18 before Rankin got his back. In the end, Jack Leach remained not out on 1 as veteran pacer Stuart Broad (3) also failed to make the most of his batting skills.