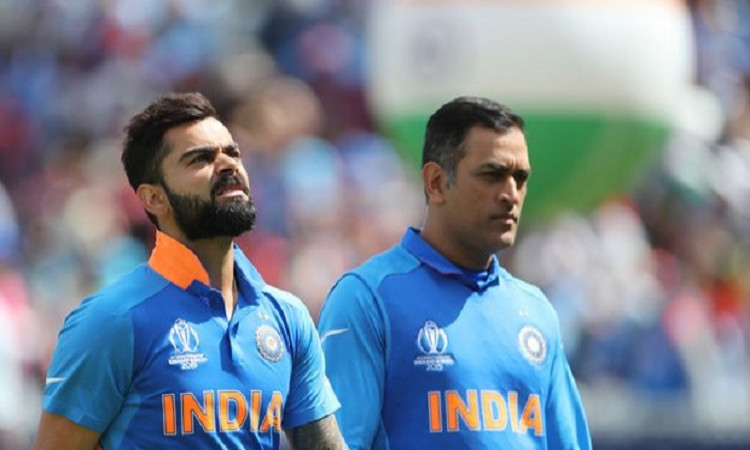 Kolkata, Aug 15:  His achievements are there for everyone to see, but Virat Kohli on Saturday chose to focus on MS Dhoni the person, doffing his hat to the legendary former India captain who called time on his illustrious international career on Independence Day.

"Every cricketer has to end his journey one day, but still when someone you've gotten to know so closely announces that decision, you feel the emotion much more," an emotional Indian captain Kohli said in a tweet.

"What you've done for the country will always remain in everyone's heart...but the mutual respect and warmth I've received from you will always stay in mine.

"The world has seen achievements, I've seen the person. Thanks for everything skip. I tip my hat to you," added Kohli.

Cricket legend Sachin Tendulkar, who had ended his long wait for an ODI World Cup under Dhoni's captaincy in 2011,
too wished luck to the former Indian skipper for his second innings.

"Your contribution to Indian cricket has been immense MS Dhoni. Winning the 2011 World Cup together has been the best moment of my life. Wishing you and your family all the very best for your 2nd innings," Tendulkar said in a tweet as social media went into a tizzy on India's 74th Independence Day following the Ranchi stumper batsman's sudden decision.

"The legend retires in his own style as always, MS Dhoni bhai you have given it all for the country. The champions trophy triumph, 2011 World Cup and the glorious @ChennaiIPL triumphs will always be etched in my memory. Good luck for all your future endeavours. #MSDhoni," senior India off-spinner R Ashwin said in a tweet.

"A visionary leader who has given us innumerable memories to cherish. May your story continue to inspire people to push beyond the boundaries of wisdom and success. You will forever be a champion, MS Dhoni," tweeted Mayank Agarwal.

"Congratulations MS Dhoni on a great international career. It was an honour to play alongside. Your calm demeanour and the laurels you brought as skipper will forever be remembered and cherished. Wishing you the very best," said Anil Kumble.

"The 2011 World Cup win was Sachin Tendulkar farewell but masterminded by MS Dhoni ... What an incredible international career ... You could argue the greatest ever white ball captain & finisher ... Cheers for all the memories MS," said former England captain Michael Vaughan.

Dhoni, who made his ODI debut in 2004, changed the face of Indian cricket with his calm demeanour, sharp understanding of the game and astute leadership qualities.

One of the most admired and respected cricketers, Dhoni is also among the most successful captains in world cricket. It was under his leadership that India lifted the ICC World Cup in 2011 after having led India to triumph in the ICC World T20 in its maiden edition of the tournament held in 2007 in South Africa. With India winning the ICC Champions Trophy in 2013 in England, Dhoni became the first and is still the only captain till date to have won all three ICC Trophies.

While his heroics in the limited-overs formats are well documented, it was also under his leadership that India became the No. 1 Test side in 2009 and the team stayed at the top for over 600 days. He has led India to victory in 21 home Test matches, the most by an Indian captain.

Dhoni turned up for the country in 350 ODIs, 90 Tests and 98 T20Is while affecting a staggering 829 dismissals behind the stumps

Every cricketer has to end his journey one day, but still when someone you've gotten to know so closely announces that decision, you feel the emotion much more. What you've done for the country will always remain in everyone's heart, but the mutual respect and warmth I've received from you will always stay in mine. The world has seen achievements, I've seen the person. Thanks for everything skip. I tip my hat to you @mahi7781