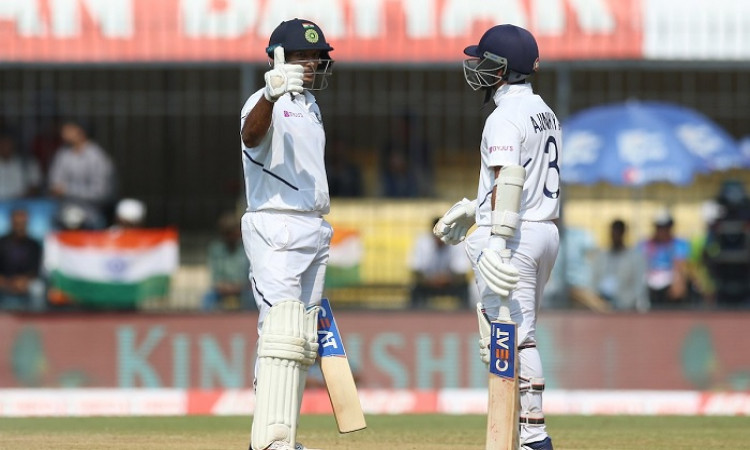 Indore, Nov 15: Mayank Agarwal and Ajinkya Rahane took India to a position of strength and sent the Bangladesh bowlers for a leather hunt as India reached 303/3 at tea on Day 2 of their first Test against Bangladesh at the Holkar Stadium on Friday.

India now lead their rivals by 153 runs with seven wickets in hand and did not lose a wicket in the second session as Mayank continued his sizzling form with the bat with a third Test century. The Karnataka opener also got this 150 off 264 balls and was batting on 156 at the break. Rahane inched closer to his century as he was not out on 82. The pair added an unbroken 184 runs for the fourth wicket. This is also Mayank's third Test ton in four matches.

There was no joy for the visiting team bowlers as they looked out of sorts with only pacer Abu Jayed, who took all the three wickets, looking good among the pack. India started the day on 86/1 with Mayank and Cheteshwar Pujara in the middle. The pair had seen India through to the end of play on Day 1 after Rohit Sharma was dismissed early but the partnership did not last long on Friday.

Jayed lured Pujara into a drive in the fourth over of the day with a delivery outside off that moved away slightly. The ball took the outside edge and substitute fielder Saif Hassan did well to dive to his left and hold on at fourth slip. The second wicket stand between Pujara and Agarwal thus ended on 91.

Mayank got to his fifty with a four in the next over but then Abu Jayed struck again for Bangladesh in the next with the all important wicket of Indian skipper Virat Kohli. The umpire had initially not raised his finger for the LBW appeal but Mominul Haque went for the review. Ball tracking showed that the delivery would have taken Kohli's lef stump and the decision was reversed. Kohli was dismissed for a two-ball duck.

However, that was the last Indian wicket to fall in the session with Rahane sticking on with Agarwal. In the process, Rahane became the 16th Indian to go past 4,000 Test runs. The pair expertly chipped away at the Bangladeshi bowlers as India surpassed their opponents' first innings total.