Lahore, Oct 5: Sri Lanka beat Pakistan by 64 runs to take 1-0 lead in the three-match T20I series at the Gaddafi Stadium here on Saturday. Put into bat, the visitors scored a challenging 165/5 before 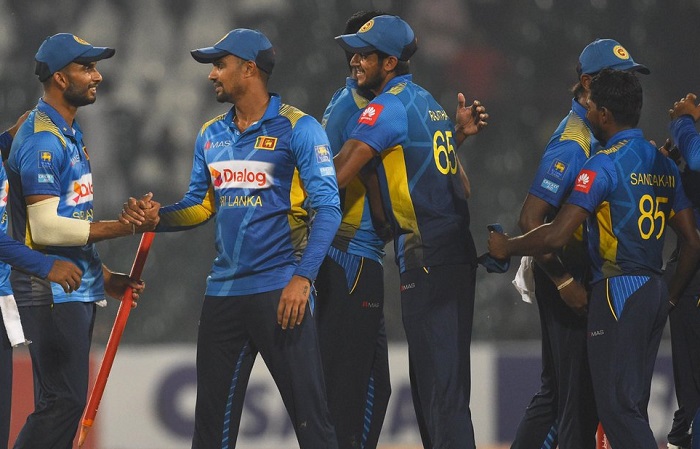 Lahore, Oct 5: Sri Lanka beat Pakistan by 64 runs to take 1-0 lead in the three-match T20I series at the Gaddafi Stadium here on Saturday. Put into bat, the visitors scored a challenging 165/5 before skittling Pakistan out for a measly 101 in 17.4 overs.

Earlier, 19-year-old Mohammad Hasnain of Pakistan became the youngest cricketer to take a T20I hat-trick to help stop the visitors from posting a 180-plus total. However, Pakistan's batting collapse rendered effort in vain.

Nuwan Pradeep and Isuru Udana took three wickets each as they blew the Pakistani top order within the first five overs. Although the hosts ensured that no more wickets fell until the 12th over, they could hardly get going.

The pressure got to them and it was a mix-up that helped Sri Lanka get the next wicket with the scoreboard reading 68/4 in 11.3 overs.

Captain Sarfraz Ahmed fell to Wanindu Hasaranga in the 14th over after which the Pakistan batsmen could hardly put up a fight. They managed to cross the three figures but hardly looked like being able to revive their chase by the time the 18th over came in which they lost their last wicket.

Earlier, Sri Lanka got off to a good start with an 84-run opening stand between Danushka Gunathilaka and Avishka Fernando before Shadab Khan provided Pakistan the breakthrough by dismissing Gunathilaka. Fernando too fell soon with Shadab catching him short of crease.

After this, Hasnain stole the show with a hat-trick. Bhanuka Rajapaksha was threatening to take Sri Lanka close to the 180-run mark but he fell to a near perfect yorker from Hasnain off the last ball of the 16th over. In his next over, Hasnain dismissed Dasun Shanaka and Shehan Jayasuriya off the first two balls to achieve the milestone.