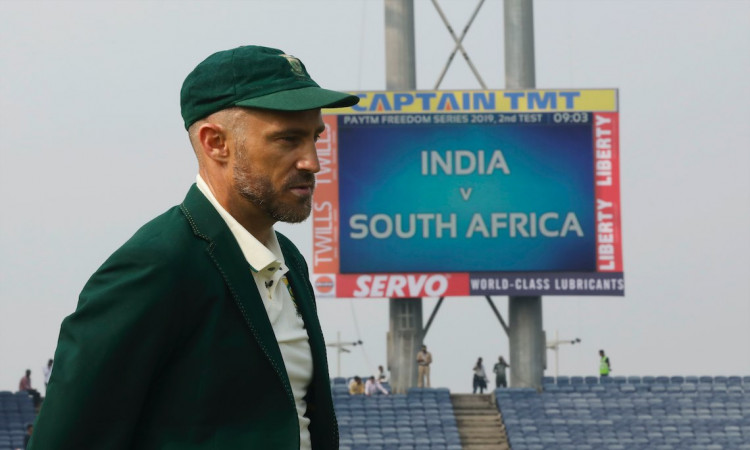 Ranchi, Oct 17:  Having already lost the three-match series, South Africa skipper Faf du Plessis has called on his players to come out with an improved performance, especially with the bat when they face India in the final Test beginning Saturday in Ranchi.

The Proteas have not been able to make use of their first innings -- barring the Vizag Test where they managed to score 431 in reply to India's 502. India, on the other hand, have dominated by getting big runs in their first innings. In the first Test, the hosts scored 502 runs while they put on 601 runs in Pune.

And, du Plessis wants his batsmen to learn from the Indian batters and make most of their first innings in the final Test.

"We need to put big runs on the board in the first innings," said du Plessis while addressing a press conference on Thursday.

"When you get runs in the first innings anything from there is possible. For us first innings runs will be vital and then anything could happen in the second innings," he added.

The Proteas skipper also underlined the importance of reverse swing, a thing which has already been stated by their premier pacer Kagiso Rabada.

"It is really important that you prepare as much as you can and make it as tough as possible," du Plessis said.

"I think wicket will spin, I looked at the pitch and it looks dry and hard. So I think reverse swing and spin will play a factor in this Test match," he added.

Meanwhile, South Africa opening batsman Aiden Markram has been ruled out of the final Test after he sustained an injury to his right wrist. According to a Cricket South Africa media release, the injury took place following Markram's dismissal in the second innings of the second match that saw India go on to win by an innings and 137 runs. In a moment of frustration with his own performance, he lashed out at a solid object, resulting in his injury.

India have already taken an unassailable 2-0 lead in the series. However, Virat Kohli has insisted that they will not relax and would aim to extend their lead in the ICC World Test Championships.