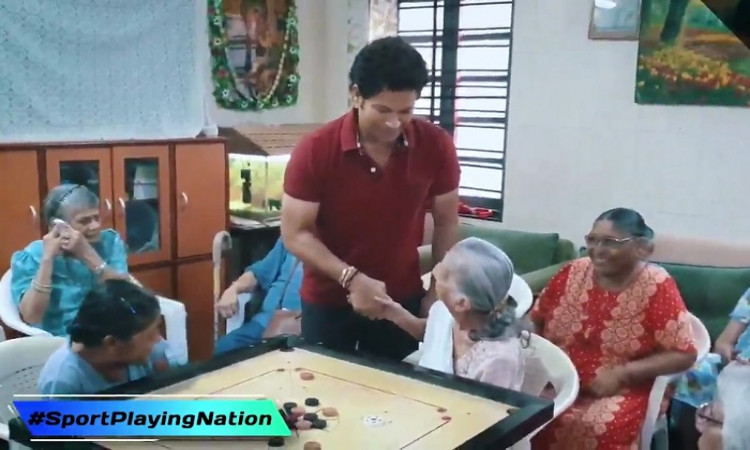 In a 45-second video shared on Twitter, Tendulkar can be seen playing carrom and interacting and sharing jokes with the women inmates.

"Spent some time with these wonder women at the St. Anthony's Old Age Home, felt blessed by the love shown by them. Their excitement to play carrom knew no bounds," Tendulkar tweeted.

"As rightly said by our honourable Prime Minister Narendra Modi, sports and fitness is for all," he added.

Meanwhile, ace boxer Mary Kom also shared a video in which she can be seen practicing at a beach.

Earlier in the day, Prime Minister Modi launched the Fit India Movement at the Indira Gandhi National Stadium in New Delhi and urged citizens to inculcate sports and fitness in their day-to-day lives.

"Fitness has always been an integral part of our culture. But, there is indifference towards fitness issues now. A few decades back, a normal person would walk 8-10km in a day, do cycling or run," Modi said.

Mixed with anecdotes and jokes and drawing parallels from everyday life, the Prime Minister's speech stressed the importance of fitness.

"I extend my wishes to all of you on National Sports Day. It was on this day that India got a sports star like Major Dhyan Chand who left the world spell-bound. Today is also the day to congratulate our young players, who are constantly giving new glory to the tricolour on the world stage," Modi said.

"Be it badminton, tennis, athletics, boxing, wrestling or other sports, our players are giving new wings to our expectations and aspirations. The medals won by them are a result of their austerity and it is also a measure of new India's new passion and new confidence," he added.

Spent some time with these wonder women at the St. Anthony's Old Age Home, felt blessed by the love shown by them. Their excitement to play carrom knew no bounds.
As rightly said by our Hon. PM Shri @narendramodi, SPORTS & FITNESS IS FOR ALL.#SportPlayingNation#FitIndiaMovement pic.twitter.com/XF78o2x5yk