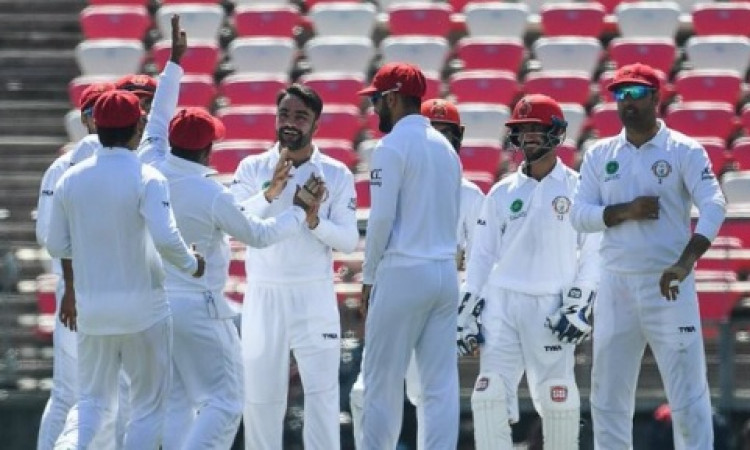 Chittagong (Bangladesh), Sep 6. A four-wicket haul from skipper Rashid Khan helped Afghanistan take control on Day 2 of their one-off Test against Bangladesh in Chittagong. Rashid took the wicket of Liton Das before dismissing Mushfiqur Rahim and Bangladesh captain Shakib Al Hasan in the same over and later Mahmudullah. He had earlier hit a crisp fifty, his maiden in the Test arena. At stumps, Bangladesh's score read 194/8 as they trail the visitors by 148 runs with just two wickets in the bag.

Earlier in the day, former Afghan skipper Asghar Afghan missed out on a maiden Test ton by eight runs. Asghar was done in by Taijul Islam, who pushed the batsman back into the crease with a couple of quick deliveries before flighting up the final ball of the 100th over. Asghar went for a slog accross the line and the ball ballooned up in the air behind the wicket. Mushfiqur Rahim completed an easy catch.

Asghar would have joined Rahmat Shah as Afghanistan's second Test centurion had he crossed the three-figure mark. However, Afghanistan's total was then boosted by a 61-ball 51 by Rashid. Rashid raced to his half century off 50 balls while batting with the tail. His innings included two fours and three sixes and his was the last wicket to fall.

Bangladesh never got going in their innings as Yamin Ahmadzai got the wicket of Bangladesh opener Shadman Islam in the very first over while Mohammad Nabi dismissed Soumya Sarkar in the 20th. Liton then fell to Rashid after which Mominul Haque and Shakib put on 34 for the fourth wicket. Rashid however came back and ended the stand by trapping Shakib in front.

Mushfiqur was then dismissed in a rather unusual fashion. The Bangladesh wicketkeeper defended the ball down to his boot after which short-leg fielder Ibrahim Zadran snaffled the catch. The decision was sent upstairs with a soft signal being out. While it wasn't clear on the replays as to whether the ball bounced off the boot or the ground, the third umpire was convinced and Mushfiqur had to walk.

Rashid then deceived Mahmudullah with a wrong'un and claimed his fourth wicket of the day. 19-year-old Qais Ahmed then dismissed Mehedy Hasan Miraz after which Taijul Islam and Mosaddek Hossain held on until stumps. The pair added 48 runs for the ninth wicket.