Ranchi, Oct 19: A brilliant century from Rohit Sharma, who was well supported by vice-captain Ajinkya Rahane, helped India get past early jitters and take a commanding position on Day 1 of the third and final Test against South Africa at the JSCA Stadium on Saturday. With bad light forcing an early end to the day's play, India's scpre read 224/3 at stumps with Rohit and Rahane batting on 117 and 83 respectively. 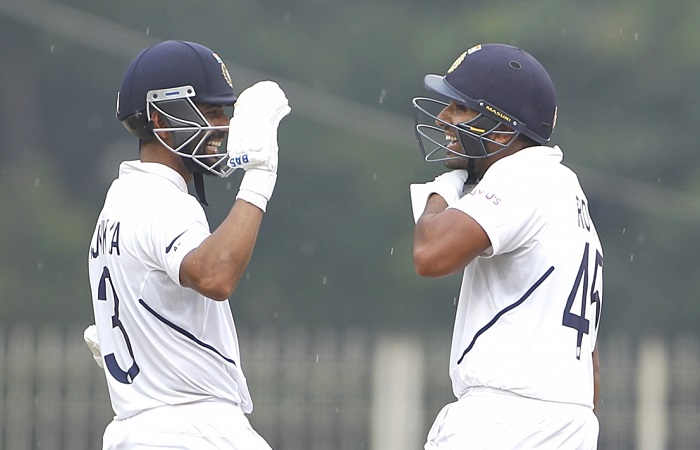 Earlier in the day, India skipper got lucky with the toss for the third time in a row and elected to bat without any hesitation. Left-arm spinner Shahbaz Nadeem was handed his Test debut as he was included in the side in place of Ishant Sharma.

However, the hosts didn't have a great start as they lost inform opener Mayank Agarwal in the fifth over for 10. Mayank, who had scored centuries in the first two Tests, was caught at third slip as Rabada bowled a beauty. The ball moved away after pitching and Mayank had no option but to poke at that. Dean Elgar picked a brilliant low catch at third slip.

Cheteshwar Pujara, who came in next, once again fell prey to an inswinging delivery from Rabada as he was trapped leg-before wicket. With the score reading 16/2, skipper Kohli walked in.

While Kohli did try to steady the innings along with Rohit, but he had to walk back after the duo put on 23 runs for the third wicket. Anrich Nortje ended his 12-run inning by trapping him in front of the wickets to earn his maiden Test wicket.

However, Rohit and Rahane took the mantle in their hands from thereafter. Not only did they take the hosts out of hot waters, they also made sure the visitors remained on the backfoot for the rest of the day.

In the post-lunch session, both came out all guns blazing and scored freely by collecting boundaries at will. The second session saw the duo score as many as 134 runs during the course of which Rohit reached his sixth hundred in red-ball cricket.

Rahane, India's deputy, also made sure he didn't let the opportunity slip and played with a very positive frame of mind during the course of his innings. While Rohit scored his third hundred of the series, reaching the three-figure mark with a six, Rahane brought up another fifty as the score read 205/3 at Tea.

Play was possible for just over seven hours in the final session when bad light forced umpires to take the players off the field. Thereafter rain also came flashing and the play was called off. Rohit and Rahane have so far added 185 runs.