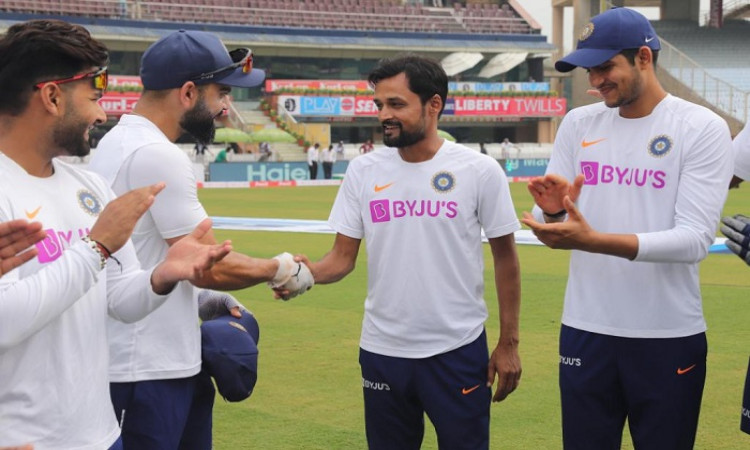 Ranchi, Oct 19:  India captain Virat Kohli won the toss and elected to bat in the third and final Test against South Africa beginning on Saturday at the JSCA International Stadium Complex here.

India have made one change to their playing XI that featured in the Pune Test. Left-arm spinner Shahbaz Nadeem has been handed debut and he comes into the side in place of Ishant Sharma who has been given rest.

"We'll bat first. It looks like a good wicket. It will be hard upfront and then got slower. Like the typical Ranchi wicket. It's a no-brainer to bat first on this one. I don't think it's gonna be slow but it will keep lower than Pune maybe. It should spin at a decent pace. As long as it turns with pace on the ball, we don't mind the bounce," said Kohli after winning the toss.

"Just one change - Ishant has been given a break. Shahbaz Nadeem makes his debut. Unfortunately, Kuldeep (Yadav) couldn't pull up. We checked on him yesterday but he didn't respond well enough from his shoulder niggle. Nadeem is the local boy and it's a dream debut. We'll have to continue to work hard and look to win sessions of cricket. That's the only message I look to pass on."

South Africa, on the other hand, have made three changes to their line-up. They have included Heinrich Klaasen, George Linde and Lungi Ngidi in their playing XI.

"Important toss as this looks the driest surface of the series. It's about the first innings really and we need to put runs on the board when we bat. One forced change with Aiden (Markram). Few other changes as well. Change in the batting order. Quinton will open the batting. Hopefully he can put pressure on the Indian bowlers, like what Rohit has done for India. Heinrich Klaasen comes in as the wicket-keeper. A new spinner in George Linde makes his Test debut," said South Africa skipper Faf du Plessis.

"Two weeks ago he was 1000 miles away from playing Test cricket but that's how quickly things happen. Lungi Ngidi also comes in. We've gone in with five bowlers to take the 20 wickets and hopefully we can. Starting in India is a tough challenge and all teams that have played here will vouch for it. We did compete well in the first game but it didn't go our way last game. We're ready for the fight," he added.