Putting team in commanding position my only goal: Virat Kohli

Pune, Oct 14:  After a dominant India crushed South Africa by an innings and 137 runs in the second Test here on Sunday to take an unassailable 2-0 lead in the three-match series to clinch the Freedom Trophy, skipper Virat Kohli said that his main goal is to put the team in a dominant position. 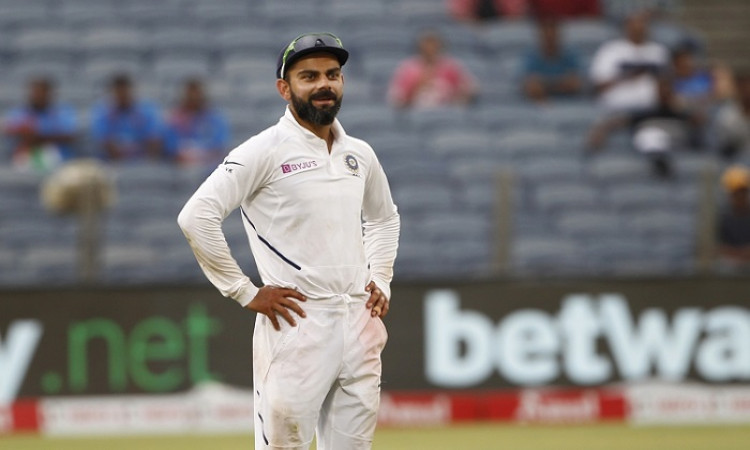 The ace batsman, arguably one of the best across formats, didn't score a century this year before the Pune Test, but atoned for his dip with a knock of sheer brilliance.

Kohli slammed a record-breaking unbeaten 254 in the first innings -- his career best in Test cricket. However, the run-machine reckoned that his sole focus is to strengthen the team's position in any contest and big scores follow from that mindset.

Player of the Match Kohli said at the post-match press conferenceend: "The mindset is always to help the team and in that process, the big scores come. I think the moment you start thinking about the team, all the pressure goes away. I am at a stage in my career where I am happy to be playing the way I am and contributing for my team. Putting the team in a commanding position is my only goal."

Kohli also said that he communicates very well with his deputy Ajinkya Rahane which is the reason they are the most successful pair for India in the longest format of the game at present.

"I enjoy batting with Jinks (Rahane), he has a great mindset. We communicate and run well between the wickets. We are probably the most successful Indian pair and the only reason for that is both of us play for the team and we take a lot of pride in that. Having him at the other end keeps you focussed," Kohli said.

The skipper also lauded the all-round performance of his side and spoke about the hunger and passion shown by all the players.

"When we started off as a group, we were at No.7 (in the Test rankings). The only way was up. We laid down a few things, told everyone to work hard at practice. We are lucky to have the group of players we have had in the last three-four years. It's amazing to see the hunger and passion among all the guys to keep improving," Kohli said.

India will next take on South Africa in the final match of the series in Ranchi from October 19.