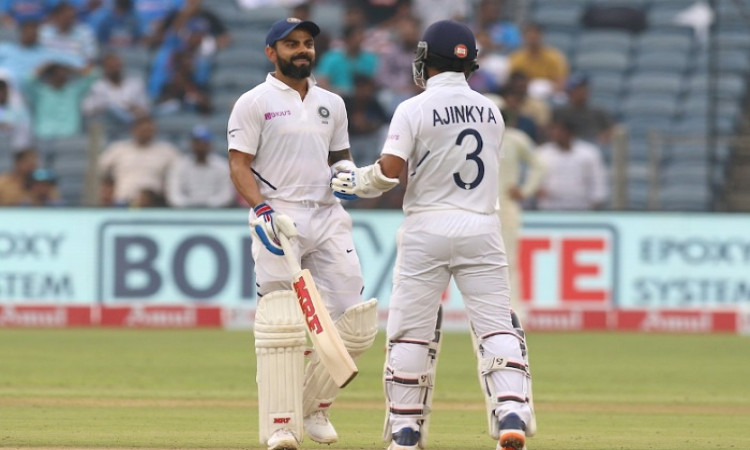 Pune, Oct 11:  India skipper Virat Kohli scored a brilliant hundred as he, alongwith his deputy Ajinkya Rahane, took the hosts to a commanding position on Day 2 of the second Test against South Africa on Friday.

At Lunch, India were sitting in the driver's seat at 356/3 with Kohli and Rahane batting at 104 and 58, respectively.

Starting the day at 273/3, both the overnight batsmen played out the first hour rather cautiously as the Proteas pacers kept bowling on probing lines and tested the techniques of the Indians with the second new ball at the Maharashtra Cricket Association (MCA) Stadium.

However, once the ball became relatively soft, both Kohli and Rahane went into their groove and started scoring freely.

First, it was Rahane who scored his first half century of the ongoing series while his skipper went on to score his 26th Test ton to pile misery on the visitors.

During the course of his innings, Kohli also went past Dilip Vengsarkar's tally of 6,868 runs to climb to the seventh position in the list of players with most runs for India in the longest format.

The Indian team amassed 83 runs in the session without losing any wicket. The bowlers toiled hard without any success and the hosts will look to make the most of a tiring bowling unit in the post-lunch session.

Earlier on Day 1, Mayank Agarwal (108) had scored a brilliant century and was ably supported by Cheteshwar Pujara (58) as India reached 273/3 when umpires called for early stumps because of bad light.