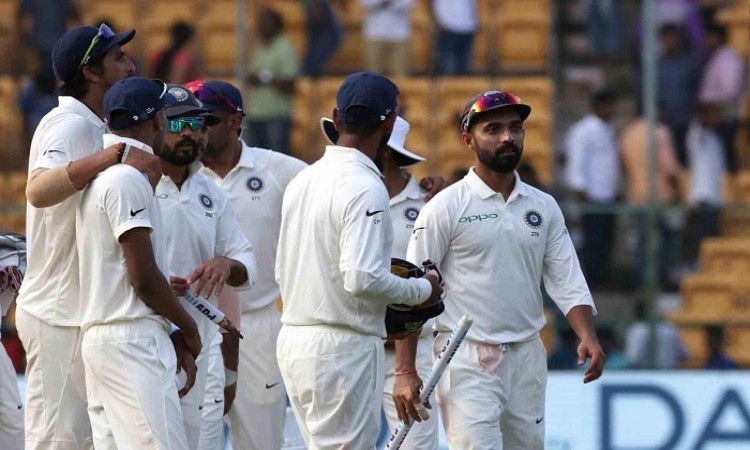 Bengaluru, June 15 (CRICKETNMORE):  A delighted stand-in captain Ajinkya Rahane praised his batsmen after India's emphatic innings and 262 run victory over Afghanistan in the one-off Test at the M.Chinnaswamy Stadium here on Friday.

The visitors, playing their first ever Test, gave a forgettable account of themselves, folding up in two sessions after managing totals of 109 and 103 respectively in two innings.

Also Read: India beat Afghanistan by an innings and 262 runs

The hosts took 40 wickets on Friday after posting 474 in the first innings.

"The way we played, especially batting, Shikhar (Dhawan), (Murali) Vijay, (Lokesh) Rahul and Hardik (Pandya). We did not take Afghanistan lightly. It was important for us to keep the basics and good habits," Rahane said at the post match presentation ceremony.

Openers Dhawan (107) and Vijay (105) scored tons as Rahul (54) and Pandya (71) racked up half centuries to blunt the Afghans' spin threat and post a challenging total.

Rahane praised Afghanistan pace duo of Yamin Ahmadzai and Wafader, who shared five wickets and looked good in the final session of the opening day.

"Their seamers bowled really well, especially in the third session yesterday and I am sure they will go a long way," Rahane added.

Man-of-the-match Dhawan said Afghanistan will learn from this and once they start playing Test cricket more regularly, they will get better.

"I want to congratulate Afghanistan for making it to this level and Eid Mubarak to them. It's always a learning process. Once they play other sides and start winning, they will get confidence. It's a big boost for their country. I would like to thank the audience for coming here," Dhawan said.

On his batting, the southpaw added: "Really happy about the way I've been playing. It's good we finished the match early and we have a few days off."

"Before going to Ireland, we will be fresh. Of course, the ball was swinging and seaming but I was clear in my mind and it went my way. By the grace of God, I scored a century in one session and it feels special."

Afghan skipper Asghar Stanikzai expressed surprise at the match getting over in two days, adding that their batting let them down.

"We were surprised with the match ending in two days because our team is good. Disappointed with the batting, but it is good for the future. We have a lot of time and camps to work on our weakness. Thanks to the fans supporting both teams," Stanikzai said.

"We haven't played a Test match before, and now we are learning what we need to do in the future against full members," the 30-year-old added.