No regular Tuesday this for Indian fans in Old Trafford 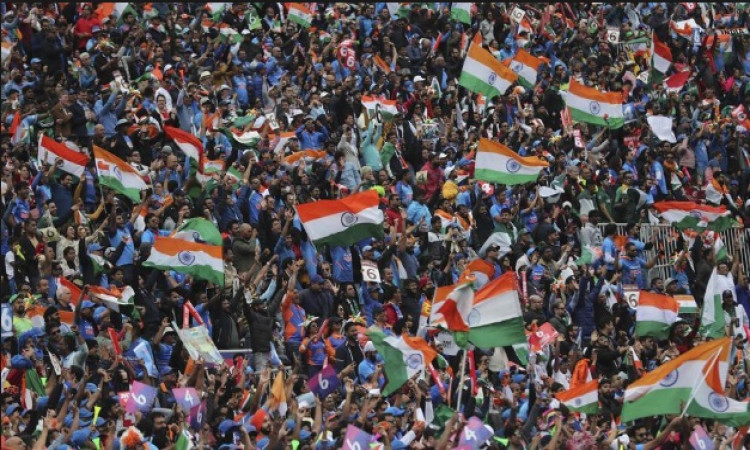 July 9 (CRICKETNMORE) It might be a working Tuesday, but for the Indians in the city, all roads here lead only to the historic Old Trafford Stadium. After all, Virat Kohli and boys are taking on New Zealand in the first semi-final of the 2019 edition of the World Cup.

Fans started queuing up outside the stadium from as early as 7.30 a.m. in the morning despite the overhead conditions not looking the most welcoming. While the weather forecast has spells of shower right through the day -- it never going to be a deterrent for the cricket-crazy Indian fans.

A stadium official at the ticket office said there has been a huge demand for tickets since Sunday. "While we had an initial rush to buy tickets, it got all the more crazy from the moment fans came to know that India will be playing here against New Zealand. Even now we have a long queue with just a few tickets left," he said.

In fact, India skipper Virat Kohli too pointed at how the fans have come out in numbers and made the players almost feel like they are playing at home. "For the Indian team there are always full stadiums and people expect you to do well, and there is always pressure, as well as opportunity. So as I said, we are well-equipped to handle those kind of situations," he said.

Pacer Jasprit Bumrah feels no different. In fact, he feels that all the adulation makes one understand how privileged the person is to be representing India. "You don't need any motivation to play for the country. Not everyone gets to do that, so you don't need any extra motivation for that," he smiled.

Indian flags and jerseys being sold outside the stadium just like in India and with people getting the tricolour painted on their faces, this Tuesday the roof is set to come falling down at Old Trafford. Expect nothing but a sea of blue as tickets are sold out for this crunch encounter and yes, a few Kiwi fans too.