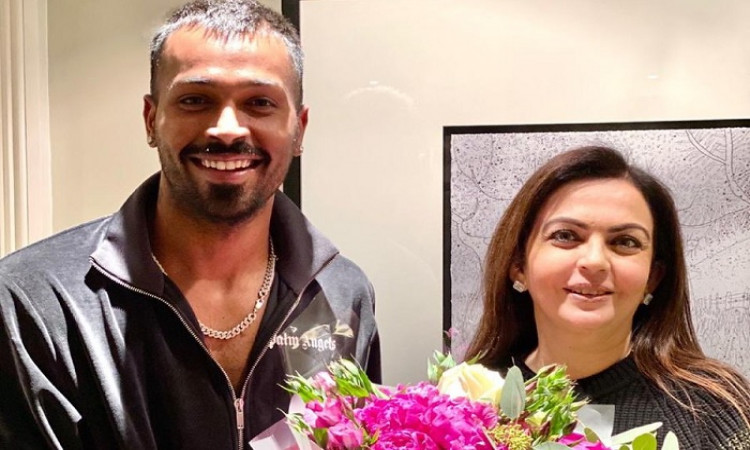 London, Oct 10:  Indian all-rounder Hardik Pandya, who recently underwent surgery to treat his lower back injury, on Thursday expressed gratitude to Nita Ambani, the chairperson of the Reliance Foundation for visiting him in the UK.

Ambani met Hardik on Wednesday, after which the all-rounder tweeted a picture of both alongwith the caption: "Thank you Bhabhi for coming to meet me here in London. Humbled by your gesture. Your wishes and encouraging words mean a lot to me. You have always been an inspiration."

Ambani is currently in the UK to attend a Sports Business Summit.

On Wednesday, praising Jasprit Bumrah and the Pandya brothers she said: "Transformational journey of a young boy who was discovered by Mumbai Indians (MI) from a small town of India has been exceptional."

"Today, Bumrah is an inspiration to countless young boys and girls. In the last 10 years, MI have discovered several young talents like Hardik Pandya, Krunal Pandya and so many more," she added.

Hardik is in the UK to get his back treated by the same doctor who treated him during India's tour of England in 2018 and during the 2019 World Cup. He last featured in the three-match T20I series against South Africa where he aggravated his back problem and was, therefore, not picked in the squad for the ongoing three-Test series against the Proteas.

On Tuesday, he had posted a video on his Twitter handle about his road to recovery. "Baby steps... but my road to full fitness begins here and now. Thank you to everyone for their support and wishes, it means a lot," he had captioned the video.

The 25-year-old is also set to miss the T20I series against Bangladesh which will be played from November 3.

Thank you Bhabhi for coming to meet me here in London. Humbled by your gesture. Your wishes and encouraging words mean a lot to me. You have always been an inspiration. pic.twitter.com/jCvVxxY1s5