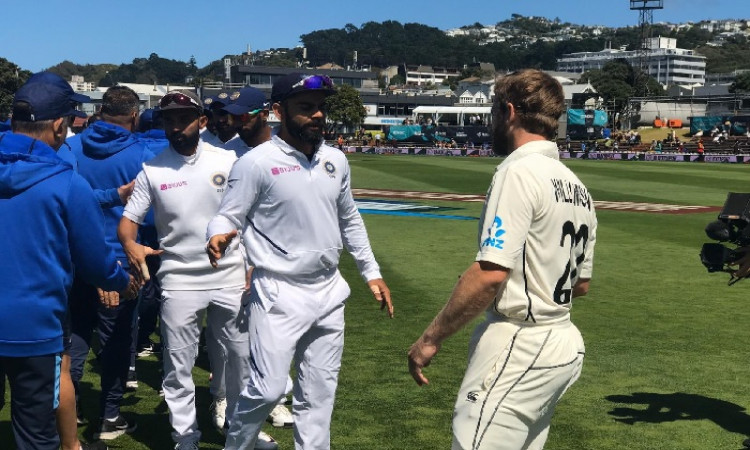 Wellington, Feb 24:  Riding on the brilliant performance of their pacers, New Zealand on Monday comfortably defeated India by 10 wickets in the first Test played at the Basin Reserve.

The hosts first bowled out India for 191 runs in the second innings and then chased down the nine-run target on Day 4 of the Test match with utmost ease to take a 1-0 lead in the two-match series.

Openers Tom Blundell and Tom Latham completed the formalities as they scored the required nine runs inside the first two overs itself.

Earlier, the Indian batters were completely blown away By Trent Boult and Tim Southee, just like they were in their first innings. Resuming the day at 144/4 and trailing by 39 runs, the visitors lost their last six wickets for mere 47 runs in 17 overs they batted on the fourth-day morning.

Overnight batsmen Ajinkya Rahane (29) and Hanuma Vihari (15) were sent back to the dressing room very early in the morning. After that, there was no looking back as the lower-order of the Indian team -- comprising of Rishabh Pant, Ravichandran Ashwin, Ishant Sharma, Jasprit Bumrah and Mohammed Shami-- couldn't take inspiration from that of the Kiwis and the visitors were eventually all out in 81 overs.

While Southee returned with figures of 5/61, Boult scalped four wickets giving away just 39 runs in the 22 overs he bowled.

The remaining wicket was taken by Colin de Grandhomme.

Latham (7*) and Blundell (2*) then made sure New Zealand didn't lose any wickets and scored the required runs in just nine balls.

For New Zealand, all their three pacers performed brilliantly throughout the course of the match and the Indian batters appeared to have no answer to the hostile, short-pitched fast bowling.

Tall fast bowler Kyle Jamieson had a dream debut as he picked four wickets in the match and also contributed with valuable 44 runs in the first innings to help New Zealand take a 183-run lead.

Southee returned with match figures of 9/110 while Boult picked up five wickets in the game giving away 96 runs in the two innings.

The two teams will now face each other in the second Test beginning Saturday in Christchurch.