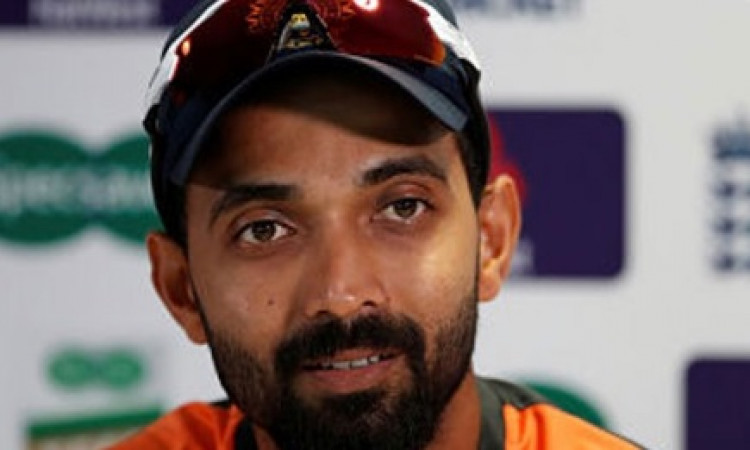 Wellington, Feb 20 India's Test vice captain Ajinkya Rahane believes New Zealand will be the favourites in the two-Test series starting Friday at the Basin Reserve considering they will be playing in their home conditions.

The Virat Kohli-led side, who are at the top of the World Test Championship table with 360 points, will resume their campaign against New Zealand, who are at the sixth spot with 60 points. The Kiwis had lost their last Test series in Australia where they were whitewashed in the three-match rubber.

India, on the other hand, had blanked Bangladesh in the two-Test series -- which also included their first-ever pink-ball Test.

"I think New Zealand are favourites in their home conditions. But I still feel the host country remains favourite because they know what to bowl and batsman are aware of what shots to play," Rahane said on Thursday while addressing the pre-match press conference.

"As a unit we need to learn and adapt quickly as New Zealand grounds have different angles," he added.

According to Rahane, India need to put in at least 320 runs in their first innings in order to provide their bowlers with a chance to bowl out the opposition.

"When you bat first, your mindset is always positive, not saying that it's not when you bowl first. If you get 320 to 330 outside India in first innings, it's a very good total.

"All the matches if you see we won (in England and Australia), we got around 320 to 350 runs on the board in the first innings," said Rahane.

"We know that our bowlers can take wickets in any condition but suppose you lose the toss and have to bat first, you should know that you are in right kind of mindset to actually go out there and tackle those situations.

"Keeping mindset right in seaming conditions even if you lose the toss is really important. Same goes to bowlers who should keep their mindset right on flat wickets. They should actually have the belief to take 20 wickets on flat tracks," said the Indian deputy skipper.

The 63-Test veteran, while calling the Black Caps as favourites, also said that the team, under Virat Kohli, is enjoying the phase where they are expected to win Test series outside sub-continent.

"There is no awe about conditions anymore. Every condition is home condition for us. Irrespective of victory or defeat, expectation is bound to be there. As a team, we want to enjoy this phase where people feel that we are favourites wherever we go," Rahane said.

Talking about his own experience of playing in New Zealand - a country where he scored his first Test hundred at the Basin Reserve, the Mumbaikar said: "That was a really special moment for me, getting that first hundred. I keep watching my maiden hundred."

"I remember that my back-lift was changing because of the wind and that was a challenge to control it. Sometimes you got to play with low back-lift and you have got to change your guard may be and play accordingly.

"This is a new challenge playing after 4-5 years. That team was comparatively young team," he added.

The India vice-captain further advised young wicketkeeper Rishabh Pant to accept the fact that he is going through a rough patch and therefore work on his shortcomings.

Pant, who till five months ago was India's first choice wicketkeeper-batsman across formats, has lost his spot in limited-overs to KL Rahul and red-ball place to Wriddhiman Saha.

"It's important to accept whatever you are going through. Be positive, try and learn as many things as possible from any of the players. Not saying it has to be senior or junior," Rahane said.

"See no one likes to sit outside but whatever your team needs on a particular game, you have got to accept that. I think acceptance is really important talking about that particular individual. Focus on controllables, keeping working hard and improve as a cricketer," he added.

Rahane, who was dropped from the Test playing XI during the 2018 South Africa tour, wants 22-year-old Pant to visualise that an opportunity could come his way anytime.

"You should try and focus on what he can control as player and keep visualizing that you will get an opportunity. You know what your role is. For Rishabh, he bats at No 6 or 7, so keep visualising about what if he gets an opportunity and what his role is. Keep it simple," said Rahane