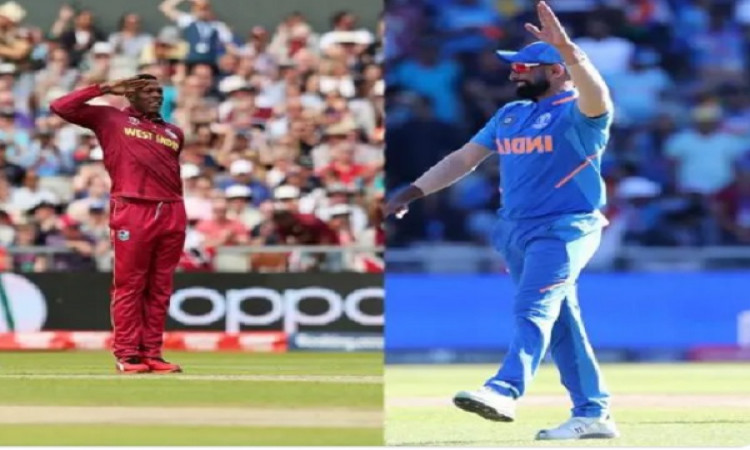 June 29 (CRICKETNMORE) Sheldon Cottrell has responded to his Indian counterpart Mohammed Shami for mocking the West Indies pacer's salute celebrations in a very peculiar and witty manner one could have imagined.

On Thursday, Shami had copied Cottrell's celebration as the Caribbean lost his wicket trying to take on Yuzvendra Chahal in the 30th over of their innings in the World Cup match which India won by 125 runs.

Skipper Virat Kohli was also spotted doing something in the match that seemed like a reference to the 'Cottrell salute'.

However, Cottrell took the joke in good spirit and took to Twitter saying it was great fun between the two pacers. The left-arm pacer further tweeted in Hindi playing down any controversy around disrespecting the army.

"Great fun! Great bowling. Nakal Karna Hi Sabse Badi Chaploosi Hai," Cottrell tweeted on Friday in response to a question put by one of the media houses that had asked whether the celebrations by Shami was plain fun or blatant disrespect of the Jamaican Army.

Earlier, Cottrell gave Shami his trademark send-off after dismissing the Indian pacer for a duck in the 49th over of the Indian innings.

Cottrell celebrates every dismissal of his with a short march and a salute to the pavilion as a tribute to the Jamaican Armed Forces. He is a soldier in the Jamaican Defence Force.

"It's a military-style salute. I'm a soldier by profession. Me saluting is just to show my respect to the Jamaica Defence Force," he was quoted as saying to the BBC earlier this year.

"I do it every time I get a wicket. I practised it for six months when I was training in the army," he had said.