Nagpur, Nov 26 (Cricketnmore) India skipper Virat Kohli along with middle-order batsman Rohit Sharma took India to 507/4 in the first innings, paving the way for the hosts to take a massive 302-run lead over Sri Lanka, on third day of the second Test at the Vidarbha Cricket Association Stadium here on Sunday. 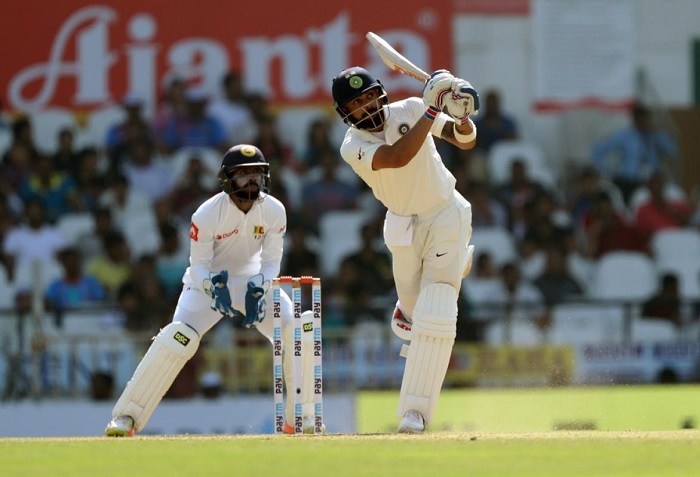 Kohli (170 not out), Rohit (51 not out) stiched together an unbeaten 97-run partnership for the fifth wicket, adding to the woes of the Sri Lanka bowlers, when umpires called an end to the second session.

For the visitors, off-spinner Dilruwan Perera (1/155) was the only successful bowler post lunch.

Resuming the second session at 404/3, Kohli, who surpassed former Australia and South Africa skipper Ricky Ponting (9) and Greame Smith (9) for scoring the most international centuries (10) in a calender year, took charge of the Indian innings and maintained a healthy run-rate for the side.

The Indian skipper's 223-ball innings was stiched with 14 boundaries and one hit over the fence.

Later, incoming batsman Rohit, who hit five boundaries and one six in his unbeaten knock, complimented the skipper to maintain the flow of runs.

The Mumbai batsman, who brought his eighth half-century, looked at ease from the onset of his innings, kept rotating strike and dealt in boundaries to maintain momentum.