Nagpur, Nov 26 (CRICKETNMORE):  Skipper Virat Kohli's 213 took India to 610/6 declared in their first innings as Sri Lanka reached 21/1 in their second innings, trailing by 384 runs on the third day of their second Test here on Sunday. 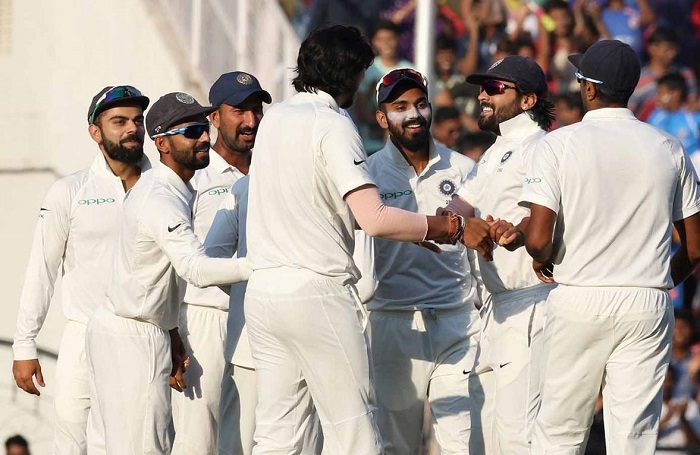 Kohli also surpassed former Australian captain Ricky Ponting (9) and former South African skipper Graeme Smith (9) in recording the most number of international centuries in a year by a captain.

After India declared at 610/6 with a first-innings lead of 405 runs, Sri Lanka lost Sadeera Samarawickrama (0), who was bowled by paceman Ishant Sharma as he left the delivery hoping it will move away but the ball moved in after pitching in the first over.

Dimuth Karunaratne (11 not out) and Lahiru Thirimanne (9 not out) were at the crease at the end of the day at the Vidarbha Cricket Association Stadium.

Earlier, resuming the day at 312/2 and a lead of 105 runs, India rode on Kohli, who had an overnight score 54. The Delhi right-hander scored the bulk of the runs for India in the morning session as Pujara added only 22 runs to his overnight individual score of 121 not out.

While Pujara was all about patience, Kohli was at ease, taking on the Sri Lankan bowlers at will. He found scoring easy as the Sri Lankans opened up the field, feeling the need to restrict the boundary shots. It meant that singles and doubles were always available for the Indian batting pair.

Facing the 130th delivery of his innings, Kohli flicked a delivery from paceman Suranga Lakmal to the mid-wicket to bring up his century, his second in as many matches.

Pujara was a perfect partner for Kohli as the former gave stability to the innings, especially in the morning session which was important to determine the expansion of India's lead.

The Saurashtra right-hander was finally dismissed three overs before the end of the lunch session. He was late to react to a yorker-length delivery from pacer Dasun Shanaka as the ball rattled his stumps. His knock was studded with 14 fours out of the 362 balls he faced.

Later, incoming batsman Rohit complemented the skipper to maintain the flow of runs. The Mumbai batsman looked at ease from the onset, rotating the strike and dealing in boundaries to maintain the momentum.

Kohli raced to 200 runs in just 260 deliveries. A single towards long-on off Perea brought up his fifth double-century in Tests.

He lost his wicket while trying to force a big shot off Perera towards long-on. The ball ballooned in the air before landing in the hands of Karunaratne, with India at 583/5. Kohli plundered 17 fours and two sixes.

Rohit, however, continued hammering and scored a brisk century -- his third in the five-day format -- in just 160 deliveries.