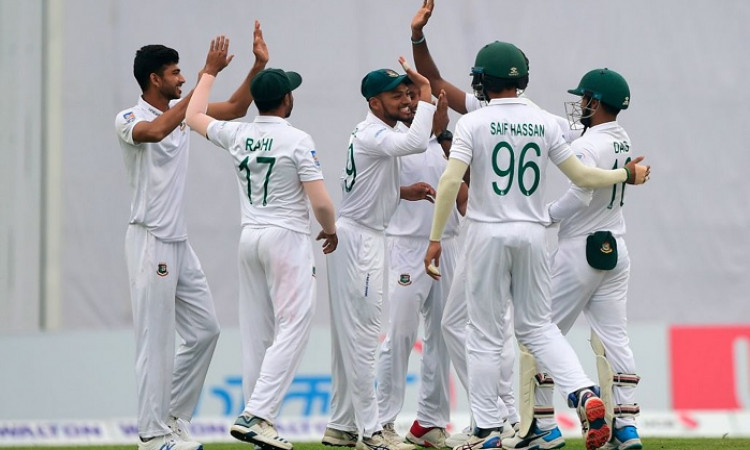 Dhaka, Feb 25:  Nayeem Hasan spun Bangladesh to a massive win by an innings and 106 runs in the one-off Test against Zimbabwe at the Shere Bangla Stadium on Tuesday, after Mushfiqur Rahim became the leading run-scorer for the country in red ball cricket. Hasan grabbed 5/82 in Zimbabwe's second innings to give him a match haul of 9/152.

The right-arm off-break bowler was well supported by Taijul Islam who returned figures of 4/78 as the visitors were all out for 189 in 57.3 overs in their second innings on Day 4 of the Test match.

This was Bangladesh's second innings victory in Tests, coming 450 days since their first against the West Indies in December 2018 -- a tie which was also their last win in the longest format.

Zimbabwe resumed the fourth day on 9/2, still trailing by 286 runs. The visitors saw skipper Craig Ervine top-scoring with 43 as the batting failed to show any kind of resistance in the face of spin.

Earlier, Rahim cracked his third Test double-century as Bangladesh bossed over Zimbabwe on the third day.

The hosts declared at 560/6, shortly after Rahim (203 off 318 balls) reached his double century. Rahim in the process became the highest run-scorer for Bangladesh in Test cricket with 4,412 runs, seven more than Tamim Iqbal's tally of 4,405 runs. Zimbabwe had scored 265 in their first essay with Ervine scoring 107.