Mitchell Santner does a MS Dhoni in nail-biter vs Rajasthan 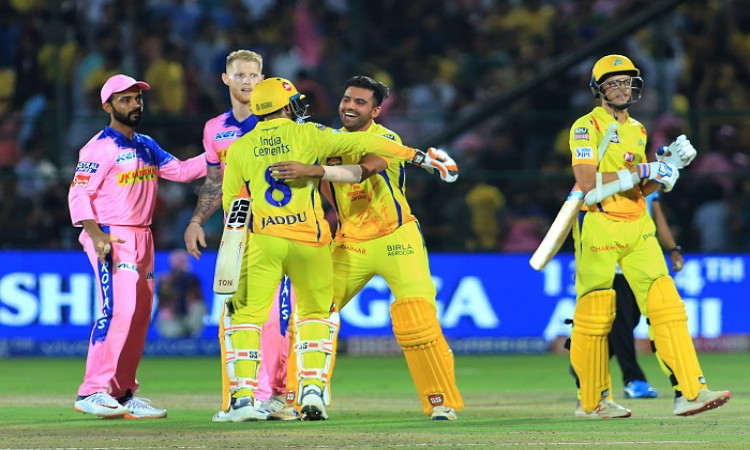 With Chennai reeling at 24/4, it was Mahendra Singh Dhoni and Ambati Rayudu who anchored their team's innings and took their side on the verge of victory before falling as Santner played a Dhoni to take the game away for the yellow brigade.

Chasing a modest 151-run target, Chennai were off to a worst possible start as they lost openers -- Shane Watson (0) and Faf du Plessis (7) --and Suresh Raina (4) with just 15 runs on board.

Rajasthan's medium pacer Jofra Archer turned things ugly for the visitors as he packed back Kedhar Jadhav on just a run as Chennai looked helpless at 24/4 before Dhoni and Ambati Rayudu stepped in and denied any further onslaughts to the home side.

The duo not only completed their fifties but also took Chennai to another victory before Stokes dismissed the duo with 18 needed in the last over.

Even after some umpiring flaws, which saw a fuming Dhoni coming in the middle and explaining his views to the umpires, it was Santner who smashed a last ball six to seal the match for the yellow brigade.

Earlier, Chennai Super Kings rode on some disciplined bowling effort to restrict Rajasthan Royals to a modest 151/7 in their Indian Premier League (IPL) tie at the Sawai Mansingh Stadium, here on Thursday.

Despite having some star batsmen in their line-up, Chennai bowlers jolted Rajasthan at regular intervals. It was Shreyas Gopal's quickfire seven-ball 19* down the order that helped the hosts cross the 150-run mark.

For Chennai, Deepak Chahar, Shardul Thakur and Ravindra Jadeja picked up two wickets each while Mitchell Santner bagged one.

Put into bat by the most successful IPL franchise, the home side lost skipper Ajinkya Rahane (14 off 11) in the third over. His partner Jos Buttler (23 off 10) also departed in the next over with just 45 runs on the board.

While Chahar was dismissed by Rahane, Buttler's stay was cut short by Thakur.

Sanju Samson (6) also couldn't show much fight, becoming a victim of Santner in the sixth over, as the Rajasthan middle-order collapsed with Steven Smith (15 off 22) and Rahul Tripathi (10 off 12) also falling in quick succession with just 78 runs on the board.

Ben Stokes (28 off 26), Riyan Parag (16 off 14), Jofra Archer (13* off 12) and Gopal then chipped in with valuable contributions to help Rajasthan post a somewhat respectable total.