Royal Challengers Bangalore's (RCB) Navdeep Saini had bowled a beamer at Rahul Tewatia in the last over of Rajasthan Royals' (RR) innings that hit the latter on the neck and sent him crashing to the ground on Saturday. 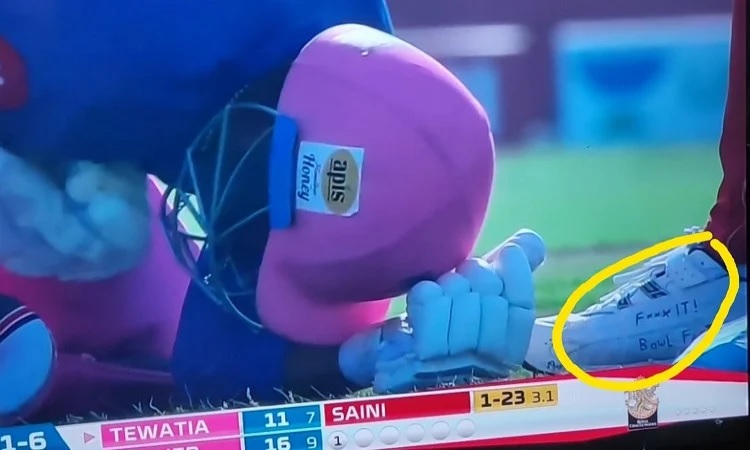 While Tewatia got back on his feet and smashed consecutive sixes off the next two balls, social media users caught the words written on Saini's shoes -- "F*** it! Bowl Fast" -- while the bowler checked up on Tewatia.

Also Read: Want To Give Russell As Many Balls To Face As Possible: Dinesh Karthik

While the TV camera focussed on Tewatia, the frame also caught Saini's shoes -- and the words "F*** it! Bowl Fast".

It is not the first time such a message has appeared in a cricket context. Australia fast bowler Mitchell Starc, who played for RCB in 2015, sported a similar message on his wrist band during a Test series against Pakistan in December 2019.

Saini and the rest of the bowlers managed to restrict RR to 154/6 in 20 overs before captain Virat Kohli's unbeaten 72 off 53 balls helped RCB reach the target with eight wickets to spare.