Me and Virat communicate really well while batting: Ajinkya Rahane 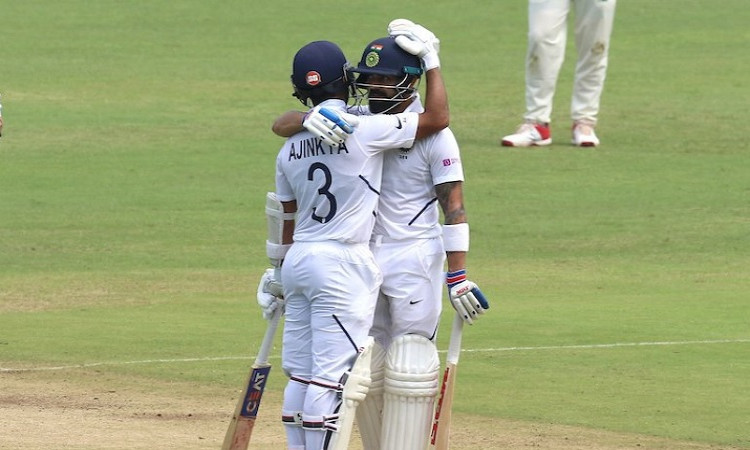 Pune, Oct 11:  India vice-captain Ajinkya Rahane on Friday said his and Virat Kohli's communication while batting together helps a lot as India rode the skipper's career-best and record breaking 254 not out to post a mammoth 601/5d in the first innings of the second Test here.

South Africa were left reeling at 36/3 at stumps, still 565 runs behind.

Besides Kohli, Mayank Agarwal scored 108 on Day 1 while Ravindra Jadeja (91), Rahane (59) and Cheteshwar Pujara (58) added to the cause with half centuries.

"The way we batted (took us to a score in excess of 600). There was assistance for fast bowlers, Mayank batted well. It was important to play that one hour really well in the morning. We were thinking about 500+," Rahane said after the day's play.

"The manner in which Virat and Jaddu batted, it looked so easy from the outside. I don't think it's a 600+ wicket, it's a 450-500 runs wicket.
We (himself and Kohli) enjoy each others' company. We (Virat and Rahane) communicate really well whenever we bat together. We knew we were one batsman short and we had to get that partnership going."

Kohli and Jadeja, promoted to No. 6 with Hanuma Vihari not playing, shared a 225-run stand for the fifth wicket while Rahane and Kohli had an association of 178 runs just before Rahane got out.

"That partnership between us was really important," said Rahane.

India pacers Umesh Yadav and Mohammed Shami took two and one wicket each respectively to reduce the tourists to 36/3. Rahane said if they keep finding the right areas to bowl to, India will win by a big margin.

"If we can bowl in right areas, we'll win by a good margin. Fast bowlers have good assistance if they bowl in the right areas. The ball is turning, Ashwin and Jadeja can bowl on any track."