Man with vision, master who knew how to build team: Rohit on Dhoni

AUG 16, NEW DELHI: Rich tributes poured in as MS Dhoni announced his retirement from international cricket on Saturday, posting a simple montage of images from the high and low points of his international cricketing career over the years with a short caption: "He is calling time on it." 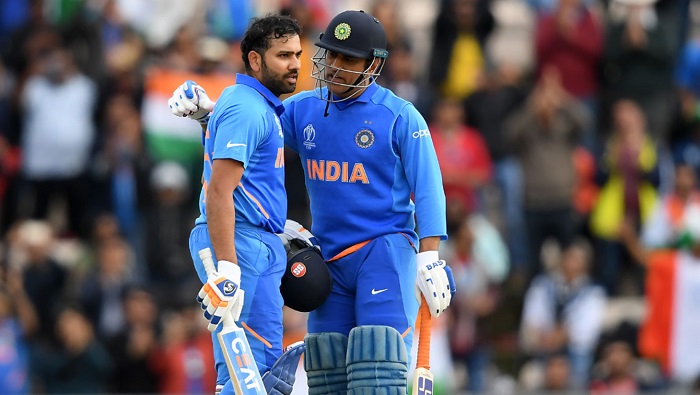 It marked the end of a trophy-laden career spanning nearly 15 years, in which Dhoni also oversaw the rise of the likes of current Indian captain Virat Kohli and Rohit Sharma.

"One of the most influential man in the history of Indian cricket. His impact in and around cricket was massive. He was a man with vision and a master in knowing how to build a team. Will surely miss him in blue but we have him in yellow. See you on 19th at the toss @msdhoni," limited overs vice-captain Rohit tweeted with a pic of him with Dhoni in the IPL.

Test vice-captain Ajinkya Rahane, who also made his debut under Dhoni's captaincy, tweeted: "Thanks for everything Mahi Bhai... you will always be special for me, have learnt so much from you! Always wishing you the best!"

Indian head coach Ravi Shastri tweeted: "Massive boots to fill. It's been a privilege and honour to be part of the dressing room and seeing you as a thoroughbred professional at work. Salute one of India's greatest cricketers. Second to none. Enjoy. God Bless MS DHONI."

Shastri also tweeted a video of Dhoni famously hitting the six over long-on at the Wankhede Stadium in the final of the 2011 World Cup against Sri Lanka to win the title.

"Legends of the game. Learnt so much from you. Watching you guys on the field was an amazing experience. Thank you for all the memories #7 #3 @msdhoni @ImRaina," she tweeted.

Her teammate and ODI captain Mithali Raj said: "The man who immortalised jersey no.7, whose sharp mind and a cool head earned him the tag of #CaptionCool, the man who fulfilled billion Indian dreams by lifting two World Cup trophies and who bid adieu in his inimitable style. Congratulations #MSDhoni on an outstanding career #Thala."

All-rounder Hardik Pandya tweeted: "There's only one #MSDhoni. Thank you my friend and elder brother for being the biggest inspiration in my career. Will miss playing with you in the blue jersey but am sure you will always be there for me and will keep guiding me #7."

Rishabh Pant, who has been touted as Dhoni's long-term replacement as India's wicketkeeper, tweeted: "A little boy had a dream of batting on the other end of the pitch with you. That little boy's dream came true, learning from you and being close to you has been the highest privilege. India will always be proud of @msdhoni. Enjoy the journey ahead Mahi bhai. Legend #7."

Australian batsman David Warner has faced Dhoni a number of times on the field during the often intense matches between India and Australia. He is set to do so again whenever his Sunrisers Hyderabad meet Dhoni's Chennai SuperKings in the upcoming season of the Indian Premier League (IPL). He tweeted: "Congrats @msdhoni on a fantastic career, he is one of the coolest guys I've played against on the park. #greatknock #calm #finisher."