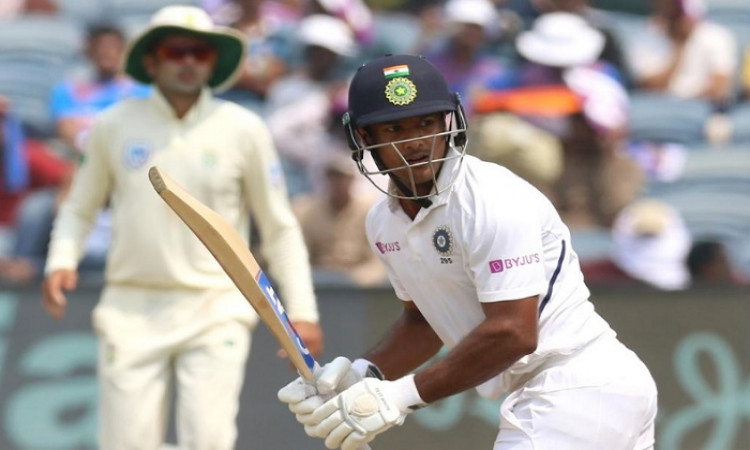 Pune, Oct 10: Centurion Mayank Agarwal underlined his mental discipline after his 108 helped India reach 273/3 at stumps on Day 1 of the second Test against South Africa here on Thursday.

It was Mayank's second ton in as many Tests after he notched up his maiden Test century (215) in the first innings of the previous Test in Visakhapatnam.

"I'm very happy that I could get back-to-back hundreds, that's a good feeling," Mayank said after the match.

In Visakhapatnam, Mayank became the fourth Indian batsman after Dilip Sardesai, Vinod Kambli and Karun Nair to convert his maiden Test hundred into a double century. The 28-year-old had slammed a brilliant 215 in the first Test, sharing a record 317-run openeing stand with Rohit Sharma.

"The team is in a good position... Winning the toss, batting first and with one batsman short, it's a good thing to make runs. There were periods when runs weren't coming easily, they bowled some tight spells and didn't let us score," the opener said.

On his approach towards batting and the work that went behind it, Mayank said: "Plenty of long-distance running, meditation and working on my game... It was always about mental discipline."

Mayank and Rohit played cautiously in the first hour on Thursday as there was some moisture in the wicket which assisted pacers Kagiso Rabada, who took all the three wickets of the day, and Vernon Philander.

"There was some moisture in the wicket and Philander and Rabada bowled tight lines. We knew we would get beaten, so we needed to play tight, play the straight lines and wait for the bad balls.

Mayank hit 16 fours and two sixes enroute his 108 before Rabada induced an outside edge off the opener that was caught by Proteas skipper Faf du Plessis in the slip cordon.

India were 273/3 at stumps with skipper Virat Kohli (63 not out) and his deputy Ajinkya Rahane (18 not out) at the crease.